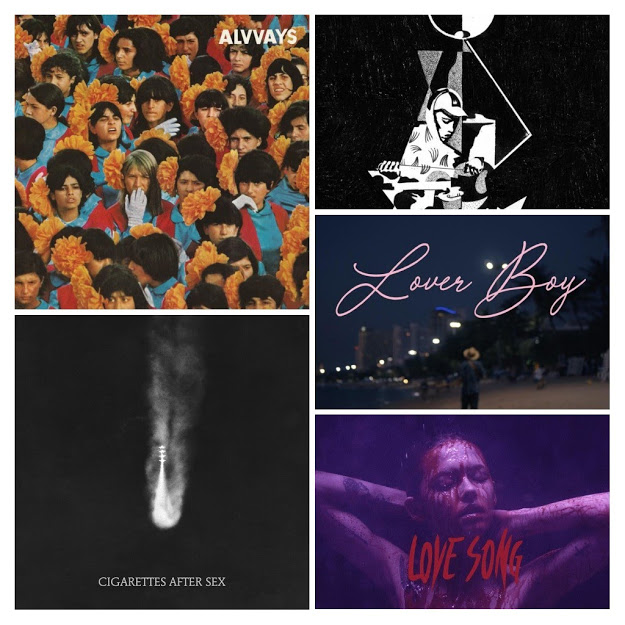 Looking for some songs to set the soundtrack to your Valentine's Day? The Oak Leaf has you covered.

Love is a central theme in music, and since music speaks to people and evokes certain emotions in ways normal speech can’t alone, it’s a great medium to talk about such feelings.

However, when it comes to what we hear on the radio, there is an irrefutable cycle of tropes and expressions in relatively popular love songs that have been played to death.

While these songs may be pleasing to the ear, most would agree the majority of them tend to lack the qualities of originality and emotion that make a love song so special and memorable.

So this Valentine’s Day, the Oak Leaf has curated a soundtrack of love to give you a few anthems to help celebrate the day.

Modern day rhythm and blues icon Daniel Caesar comes through with one of the most smooth and intimate songs of the year with “Get You,” taking a moment to reflect on how lucky he is to have meet the special girl in his life.

In an interview with Billboard, Caesar explains how, “I met a girl and got very involved. She brought things and feelings out of me that I didn’t know I had. ‘Get You’ is a song of praise to a love I didn’t even feel I deserved at the time.”

The euphoria Caesar feels when he’s with this person, and the sentiment of being so thankful for that special someone, is something that can resonate with all listeners.

Russian punk rockers Biting Elbows take a change of pace to deliver a nostalgic ‘80s love ballad. But don’t let the title of the track fool you.

The song, while sweet sounding and what you’d expect musically,  explores the opposite side of the spectrum lyrically when it comes to love: what it feels like to long for someone who clearly doesn’t reciprocate the feeling.

On the track, the frontman Ilya Naishuller describes the uneasy feelings of going through a relationship and having to carry the ghosts of his former lovers into this next phase of his life. Naishuller repeatedly asks himself, “How does it feel to be here, cold and lonely?” which reinforces the idea that mentally, part of him hasn’t moved on despite the new opportunities at love he’s being given.

It may not sound very affectionate, but there are aspects of “Love Song” that irrefutably come along with liking someone and not having it work out.

Thailand’s newest guitar-wielding singer-songwriter caught the attention of many listeners from the Western culture who had never heard his music before at all with this endearing and soulful love song.

The lively guitar riffs shine and work in perfect harmony with his lyrics about being enamored at first sight with someone and pursuing them after. Musically, the glistening guitar melodies and dreamy interludes reflect the lightheartedness he felt and his hopeful outlook on the world once he fell in love.

Despite the fact that material things seem to give us a sense of happiness, Viphurit would argue that true peace and deeper happiness come from being with someone who you love.

4. “Reflections After Jane” by Clientele

“Reflections After Jane” is a subdued and reserved love song, contrary to many on this list. The song is by no means the lighthearted and bubbly upbeat song a listener would expect when talking about. It’s delivered both lyrically and sonically in a more somber way to match the energy of a singer who longs for nothing more than to be with his beloved.

Canadian indie pop band Alvvays came out with an eclectic and nostalgic pop song called “Archie, Marry Me.”  Singer Molly Rankin criticizes the social norm of how young people are supposed to get married and undergo the formalities of a wedding once they have been together.

Instead, Rankin suggests it’s possible to live life of commitment with the same amount of fulfillment and happiness – but without someone else without the pressure of a wedding as a social norm., She also says that a wedding shouldn’t be seen as the highlight of a marriage.

Wavy synthesizers and groovy bass notes on the track end up creating a catchy amalgamation of some of the best pop music elements for a upbeat song revolving around someone that the singer Dapperton is infatuated with.

On the track, Dapperton describes some of the overarching qualities he values in his crush like their sense of style and the way they interact with him.

He also goes deeper into the relationship, though. Dapperton cries out how his lover has misjudged his character along the way, and that he wants to show who he really is and clarify his intention as anything but malicious.

This is song is strange at first listen, but it has musical and lyrical qualities all audiences can vibe with and does a good job of putting an original spin on the classic love song format.

7. “Apocalypse” by Cigarettes After Sex

This song is a serene, forlorn and bittersweet ballad where the singer muses over coming to grips with the fact that him and his ex girlfriend are no longer together.

Singer Greg Gonzalez sings about being locked in a mental prison of his own doing and feeling plagued by the ghost of his ex.

Dreamy and melancholic guitar notes echo in what sounds like a haunted hallway that mirrors the emptiness in his heart.

Definitely not one of the most upbeat songs, “Apocalypse” reflects Gonzales’s desire to return to an earlier time when love played a bigger part in his life.

This is a song from Illinois-based rock band The Orwells’ second album, “Disgraceland.” . The track is a charming love song chronicled by lead singer Mario Cuomo’s experiences with teenage summer love.

Cuomo reminisces about forming a relationship with his girlfriend and how he realized he loved her on one of their walks home from school, explaining what aspects he valued in his beloved and what he could do to always improve himself and be transparent with her moving forward.

The song is loveable and relatable by painting the familiar picture of young love.

9. “Out Getting Ribs” by King Krule

London-based alternative guitar singer-songwriter Archy Marshall, also known as King Krule, performed this song as the closer of his first album “Six Feet Beneath The Moon.”

Marshall’s rumbling,bass-filled voice takes listeners through a deeply emotional performance. It begins with his low whisper as Marshall recalls the countless hours he spent trying to win  his future girlfriend’s love – and the emotional damage done to his soul when his pleas went unheard.

Marshall then explores the upper register of his voice when he begs to be accepted by the object of his desire who Marshall feels is the only one who can save him from his depression.

Lonesome arpeggiating guitar rhythms contrast with glistening lead notes to further the tension Marshall expresses over not knowing how to win his desiree’s heart..

As Marshall ends up getting the girl in the end and he assures her not to worry about a thing from that point on, the song crescendos and, just as the pace picks up, the song and the album come to a screeching halt.

This is the tenth song from Atlanta-based rapper Playboi Carti’s second album “Die Lie” The music’s hypnotic and uplifting spirit places the listener in Cardi’s shoes, and captures the essence of what love feels like to someone who has been prone to hiding his sensitivity from the public eye.

Carti’s repetitive but enthusiastic flow rejoices the fact that he has found true love, beyond a surface-level happiness he rapped about in the past.

Now, that doesn’t mean that Cardi has never been a bard or lyrical genius by any means. Lyrically, it’s as simple as you can get. But Cardi figures out a way to deliver a lot of passion with so little, by choosing rhetoric that will invoke an emotional response from the listener.