Social equality speaker engages students on issues of race, ethnicity and nationality that stem from bias and assumption 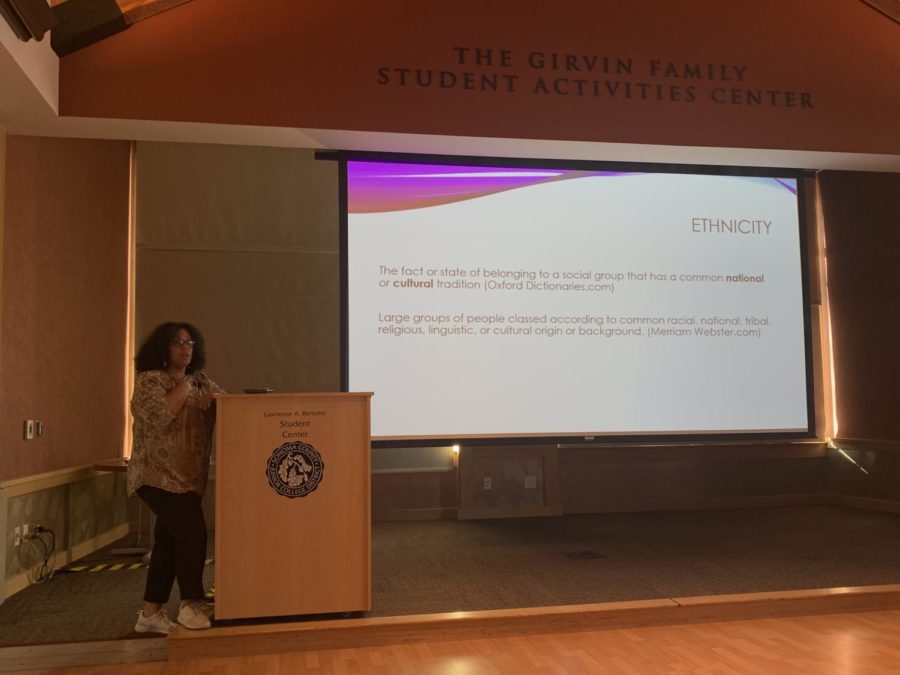 A social justice speaker engaged students on breaking down racism, bias and assumptions related to a misunderstanding of race, ethnicity and nationality during an event Wednesday morning in the Girvin Family Student Activities Center.

The event speaker Kimberly MacNeil, a social worker who has her master’s degree in social sciences with a focus on social justice, cited a Princeton University study that said a person forms an opinion of another “within a tenth of a second” of meeting.

This initial judgement combined with bias, assumptions and actions creates a “ladder of inference,” according to MacNeil, a ladder that can feed a vicious cycle of hate.

“We want to stop that negative loop,” MacNeil said she believes her goal is possible through education.

Ethnicity is a vague term that usually includes social, cultural and religious groupings, but is often mistaken for a method of classifying by outward appearance, according to Macneil.

“Race is manmade, meaning someone put people into different categories,” she said.

MacNeil explained that in the 1800s, Negroid, Caucasoid and Mongoloid races were created to define different-looking groups of people. These groups went on to divide humanity in an us vs. them way.

MacNeil identifies as black, but also says she is white and Native American. She is proud of her diverse background.

Professor Jerry Thao is an SRJC instructor who attended the event with her counseling class, a group currently covering topics on nationality, race, ethnicity and religion while they read “I am Malala” and “Becoming Dr. Q,” two books that rely heavily on these themes.

“For students to get to see [MacNeil’s] personal experience and how she was able to navigate ethnicity and race was applicable,” Thao said.

MacNeil, who is also a part-time relationship coach, stressed the value of knowledgeable communication between groups of people with different experiences and worldviews.

“Just to be educated about words and terminology allows you to show up and have a dialogue that isn’t out of anger and emotion,” she said.

UMOJA Co-Director Jesekah Loggins has for the past five years helped prepare events around campus including those during Black History Month.

“I think it is really important to have these informed conversations,” Loggins said about Wednesday’s event. “It is important to expand [students’] minds and present information so that they learn more.”

MacNeil will host “Micro- and Macroaggression and Stereotype Threats in the Educational System” at noon on Tuesday in the Girvin Student Activities Center, expanding on ideas from Wednesday’s event with UMOJA.