“Glass” is brittle; M. Night Shyamalan fails to live up to the hype 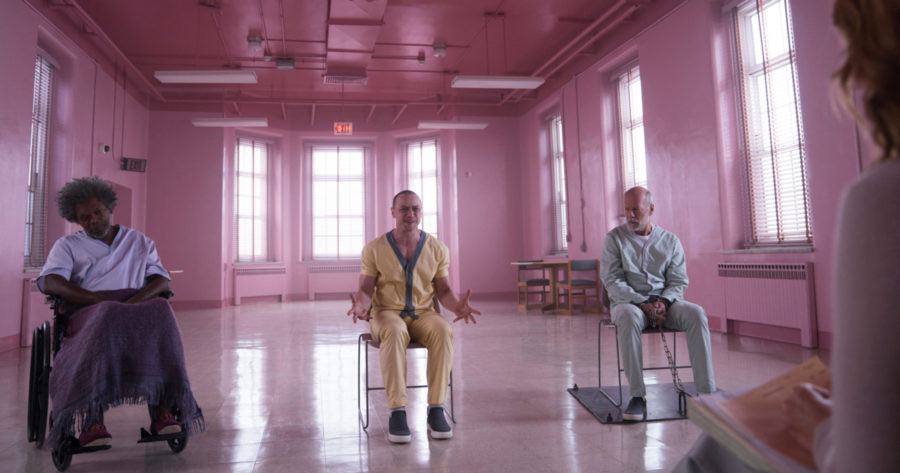 M. Night Shyamalan’s “Glass” falls flat despite its excellent predecessors, and in true Shyamalan fashion, the movie takes one step forward and two steps back.

“Glass” is the conclusion in a trilogy of suspense movies preceded by “Unbreakable” and “Split.” The trilogy began with “Unbreakable” in 2000, starring Bruce Willis and Samuel L. Jackson, before the flood of superhero movies we have now. It was a movie rich in suspense with surprising twists and an interesting and unexplored premise: real-life superheroes.

“Split” was released in 2017 and was coined as a horror movie with elements of a psychological thriller. The movie followed a man with an extreme case of dissociative identity disorder, so severe that he had 23 distinct personalities living in his brain, with a malevolent 24th persona emerging to kill. The movie ended with a satisfying and mind-blowing twist that connected the horror film with “Unbreakable.”

But with the cat out of the bag, “Glass” has no mystery to it and fails to stand on its own or as a direct sequel to “Split.”

The film’s most egregious sin is underutilizing its lead actors.

James Mcavoy, Bruce Willis and Samuel L. Jackson are all great actors; even the most junior among them, McAvoy, has several iconic roles under his belt. Of the three, McAvoy is given the most screen time and the most room to show off his acting chops, playing 13 of Kevin Wendell Crumb’s 24 distinct personalities, collectively known as “The Horde.”

Bruce Willis reprises his “Unbreakable” role as David Dunn, a security guard with superhuman strength, stamina, invulnerability and extrasensory perception. The film sets Willis up to be the hero as he hunts for “The Horde” (McAvoy), who has kidnapped four teenage cheerleaders. Beyond some likeable banter with his son Joseph (Spencer Treat Clark), Willis is unable to develop David Dunn much further than being an immovable object to McAvoy’s unstoppable force.

The most disappointing part of the movie is its titular character.

Samuel L. Jackson portrays Elijah Price, dubbed “Mr. Glass” both by the children who bullied in him in his youth and by the news media after his arrest in “Unbreakable.” Elijah Price suffers from Type 1 osteogenesis imperfecta, making his bones severely susceptible to breakage. Jackson is a powerhouse actor, much loved by his fans for his many iconic roles, but “Glass” gives Jackson very little to do besides sit in a wheelchair and act sedated for more than half the movie. His talents are squandered and the character is not done justice.

Sarah Paulson of “American Horror Story” joins the cast as a psychiatrist devoted to curing patients with delusions of grandeur, specifically those who believe themselves to be superheroes. Her character, Dr. Ellie Staple, is a thinly-veiled antagonist to the three main characters who spends most of her time trying to convince David Dunn, Kevin Wendell Crumb and Elijah Price of their delusions. Dr. Staple is the weakest character and detracts from the film as a whole; it would benefit from her absence entirely.

What made “Unbreakable” a cult favorite was its slow-burn and deep analysis of the comic book genre. “Split” was terrifying because you were as vulnerable to the plot as the girls who The Horde captured, awaiting the terrible Beast’s arrival. These two films were smart in their reveals, their twists and their storytelling.

“Glass” is a ham-fisted thriller with shoehorned throwbacks to its predecessors, dull twists and an ultimately pointless ending to the trilogy. The film is as brittle as its titular character with none of his villainous genius.