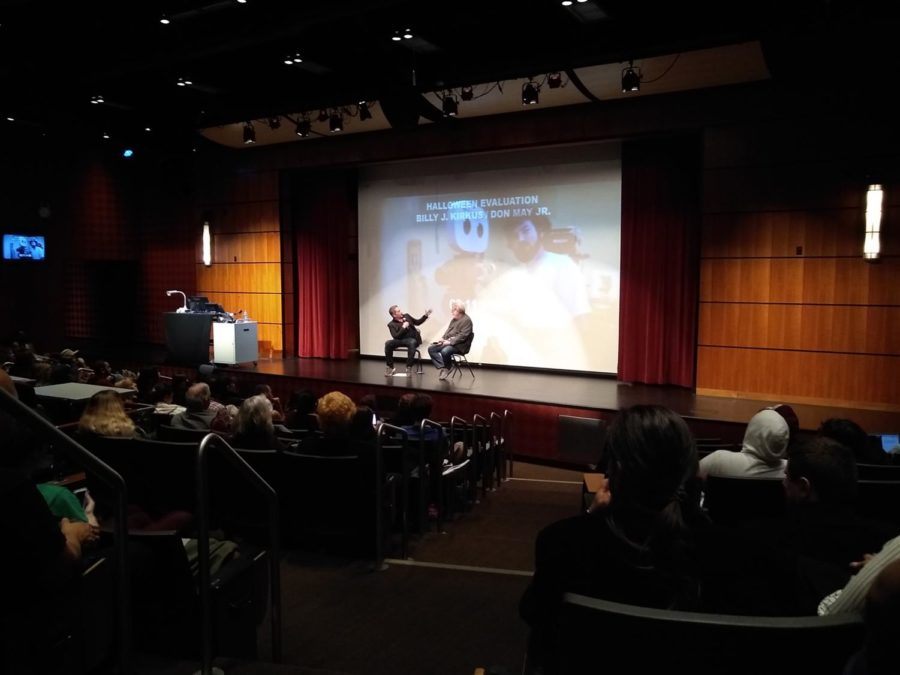 Looking back on his four-decade career in the movie industry, renowned cinematographer Dean Cundey told Santa Rosa Junior College students how proud and passionate he was to tell stories through the language of film on Oct. 31 at the Petaluma campus. Cundey, 72, spoke at the Carole L. Ellis auditorium in Petaluma after a screening of the 1978 cult-horror classic “Halloween.” He answered questions about his involvement in the movie and gave insight into what it’s like to work in the film industry.

Every Wednesday night the Petaluma Film Alliance—a partnership between SRJC, local businesses and community members—shows a movie, which is usually prefaced by an open lecture. A diverse crowd of JC students—adults, seniors and many in costume—filled the auditorium for the Halloween evening show.

Media instructor Alex Pirolini spoke about techniques horror movie camera operators use to create fear and suspense by focusing on the unknown and making you have to imagine what’s happening off camera.

After 30 minutes, Pirolini paused the lecture to bring out Cundey and introduced him to the audience as, “One of the most prolific cult movie makers of all time that has mastered not only camera movement, but capturing life.”

Cundey briefly explained how one of his favorite aspects of film-making has been being able to take viewers places where they couldn’t normally go in real life and create art that serves the film well.

He discussed how he started out studying film at UCLA, but then got into the movie business in 1973 by making inexpensive action movies for drive-in theatres that needed something to play, and admitted there would usually be “some girls in bikinis with machine guns and something would blow up,” in nearly all of them.

“Halloween” was just another low-budget movie that no one ever thought would becomethe icon it did. Cundey reflected on how the crew had only 21 days to film because of the small $70,000 budget.

But when “Halloween” hit theatres, it became the most successful independent movie upto that point, making $70 million and revolutionizing horror forever. After they described more technical aspects of filming for other movies like “Jurassic Park” and “Back to the Future,” the pair wrapped up the interview and took their seats to watch “Halloween.”For some in the audience, it was their first time seeing it. For others, it’s long been one of their favorites.

At times the audience was spooked by the jumpscares or gripped by the suspense of knowing Michael Myers was waiting just out of frame to strike. Other times they laughed at moments that have become cliche in the numerous horror flicks that spawned since Halloween’s release, like Jamie Lee Curtis accidentally leaving her keys behind and getting locked out of the house, tripping while running, discarding her knife for no reason and making it impossible to kill Michael Myers.

The 40-year-old movie has stood the test of time and remains one of people’s favorites, giving Cundey a sense of pride in his work and satisfaction knowing it was semi-sophisticated for the time.

After the movie ended —despite Michael Myers surviving the impossible—the credits rolled, the crowd applauded.

About half of the audience stayed for the Q&A session. Cundey talked about meeting directors like John Carpenter, Steven Spielberg and Robert Zemeckis and said some of his best memories filming have been with them and their respective styles.

An aspiring filmmaker in the audience asked how to get started working in the industry. Cundey replied, “Take any job you can possibly get at first. Have the perception to do whatever is necessary, especially when starting out so you don’t limit your opportunities.” Whether it was starting off his career bringing a van full of extra lights and camera equipment to make himself seem more desirable, confronting a director about something he didn’t like, trying new filming techniques, or learning to make the transition from film to digital cameras, Cundey had to be flexible to overcome a fair share of struggles on the set.
Cundey added that people who want to make movies now should be optimistic. “We live in a world where it’s a good time to be a filmmaker. There are new platforms like Netflix or YouTube that are desperate for new products to show.”

Cundey left the audience with some advice if they choose to pursue movie making: Aside from being optimistic about new platforms, he told students not to ask how much they are getting paid when starting out so they can maintain the image that their focus is to make the best piece of
art possible rather than a paycheck.

Audience member and SRJC student Adrian Hernandez, 21, summed up his opinion of
the speaker and the event as a whole.

“I really liked it because I want to be a filmmaker in the future, and I thought it was really
interesting how he thought of his job as a form storytelling,” Hernandez said.