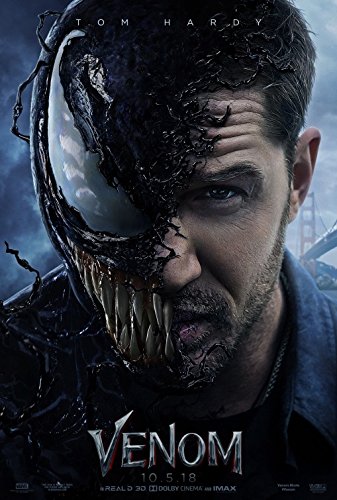 If you’re going to pay to see “Venom,” stick with 2D and cheaper matinee shows. If you want to save some money, this movie might be fun to laugh at on the smaller screen when it inevitably hits Netflix within the next year.

From the beginning, “Venom” was expected by many to be a terrible movie. The production crew and studio faced  setbacks in the early days and every bit of information that got leaked was often met with negativity by fans. Critics didn’t have high hopes for the anti-hero’s solo debut, and when Rotten Tomatoes released their statistics of the early reviews, no one was surprised that it faced opening weekend with 28 percent (with 27 reviews). As more reviews came in, that number only climbed to 32 percent (with 193 reviews), making it “certified rotten,” and I would have to agree.

Many reviewers commented on how one of the only things they liked about the movie was the relationship between good guy/reporter Eddie Brock (Tom Hardy) and villain/alien, Venom (Tom Hardy). After watching a movie filled with disappointing CGI, an unrealistic chase sequence and characters who made decisions no normal person would make, the opinion of the mainstream media and comic book nerds alike was accurate. The dialog between the human and the symbiote is somewhere between a buddy cop movie and a bromance with an extra terrestrial spin. Dialog between Brock and pretty much everyone else, however, is unnatural and awkward.

The visual effects are drastically underwhelming, especially after something as visually epic as the last few years of Marvel movies. While Marvel partnered with Sony on “Venom”, it looks like they were not in charge of visual effects. The big battle sequence had marginally better CGI than the rest of the movie, but it wasn’t enough to redeem the entire film; rockets should have orange fire when they explode, not blue, and the chase scene through the heart of San Francisco was so badly edited, it was painful to watch. It certainly would not be worth paying the extra money to see it in 3D.

Venom’s tagline,“The world has enough superheros,” is fairly fitting given the history of Venom’s comics. The PG-13 rating seemed appropriate, right up until someone’s head gets bitten off. There’s barely any gore or blood splatter but Venom’s penchant for literally ripping people apart and eating them is obvious from the get-go. Since the movie is rated as PG-13 because of “intense sequences of sci-fi violence and action, and for language” it’s understandable why they dodged the R rating, but not by much.

This movie was supposed to be a part of Sony’s reboot of the Spider-Man universe from 2012, but after the sequel , “The Amazing Spider-Man 2” did not perform as well as expected in the box office, Sony revamped the entire schedule.

The script for Venom had been floating around since the early 2000s; it seems the script stayed in the early 2000s. It’s written like a remnant of the side character comic book movie era such as Halle Berry’s “Catwoman” or Jennifer Garner’s “Elektra.” With the relationship between almost everyone with speaking roles being strained, I almost can’t help but wonder how many characters were severely miscast?

“Venom” continues Sony’s journey into the Marvel universe, but according to the studio’s recent announcements, they will only be focusing on the Spiderman universe. Actor Jared Leto was recently announced as the lead in Sony’s next Marvel character movie, “Morbius,” a vampire bad guy from the Spider-Man comics. A movie about Spider-Man villain Kraven the Hunter is also rumored to be in the works.

There are two credits scenes, almost a standard in comic book movies these days. The first credit scene references a character that has been not been confirmed will be given real screen time in the future. But the fact that this cameo was made makes me wonder if the studio is testing the waters and seeing if the fans even want them to go that route at all. The second credit scene however was more of a sneak peek clip from  the upcoming animated movie “Spiderman: Into The Spiderverse”. It’s unclear why the studio put this clip at the end of Venom when it was really more suited for a big reveal at New York Comic Con, conveniently happening on the same weekend as the opening of Venom.

All in all, if you like cheesy comic movies, or are a Spider-Man universe fan, this movie may be worth it. But given movie ticket prices these days, you’re better off just waiting till it’s online.