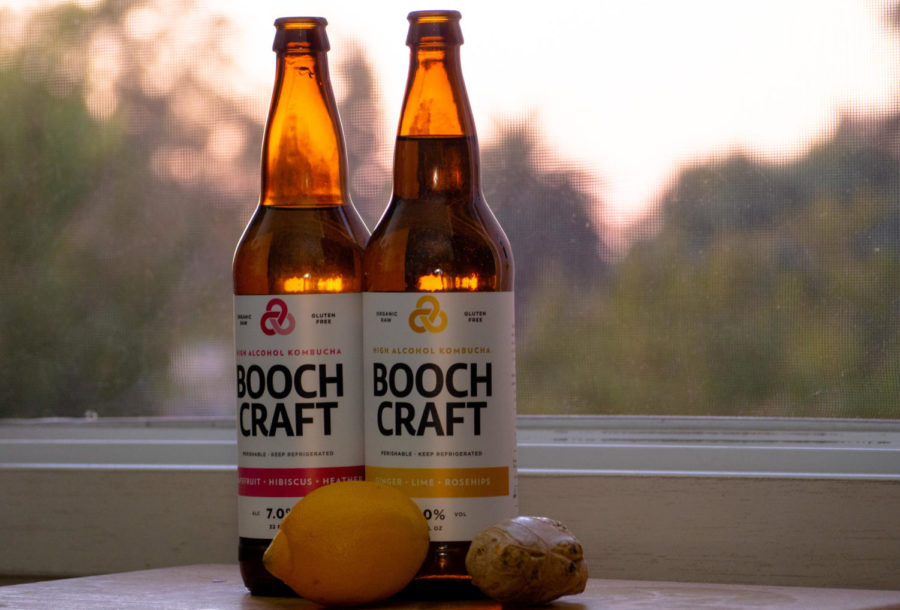 Boochcraft’s high alcoholic kombucha is great for any time of the day, from brunch to an outing with friends.

Boochcraft is a Californian microbrew brand that makes high alcoholic kombucha. All six of Boochcraft’s brews have a 7 percent alcohol by volume (ABV) and taste much different than beer. Boochcraft’s Grapefruit, Hibiscus and Heather and Ginger, Lime and Rosehip are the two high-alcohol kombuchas that I tried this week.

Kombucha is a fermented black or green tea, which is fermented only by yeast, but by a symbiotic culture of bacteria known as a SCOBY. The fermentation process does not produce detectable levels of alcohol in regular kombucha.

Grapefruit + Hibiscus + Heather kombucha has a fruity taste, similar to a mimosa. Grapefruit is the only flavor that has a heavy presence in the drink. The hibiscus adds both a bitterness and a sweetness, which reminds me of champagne.

The pinkish coloring resembles grapefruit juice but by the end of the bottle it looks cloudy from the natural yeast.

Alcoholic kombucha with its sweet and easy going character, could make for a great substitute for a mimosa or other brunch themed drinks.

The higher level of carbonation was more similar to a glass of champagne than a beer.

The Ginger + Lemon + Rosehip makes for a good summer drink with a heavy citrus taste from the lemon and a good kick from the ginger.

The drink would be great for a sunny day as it would pair well with some tacos or fish and chips.

This brew’s color is a cloudy yellow from the yeast still in the bottle from the fermentation process. There is a strong smell of yeast but not enough to overpower the lemon and ginger scent.

Alcoholic kombucha is the perfect drink for killing your liver while simultaneously increasing your probiotic count.

On Tap, new reviews will be every week, spanning from beer to kombucha. The next brew will be Lagunitas limited release. I am starting this series to help other 21 year olds and any one interested in the art of drinking.  Next review will be coming from my friends and A&E editor Taylor Marek Seprish.