Back to the “Colonies” 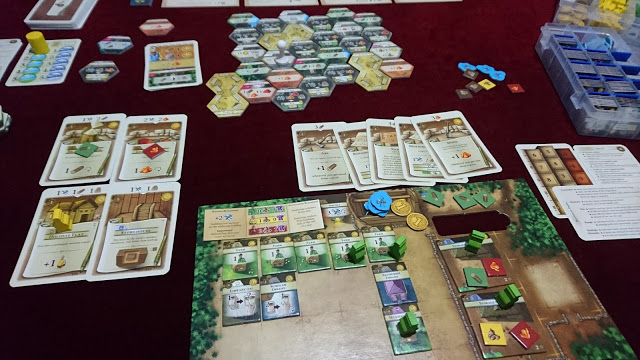 By the second era, "The Colonists"'s play area is crowded with cards, notes and game pieces.

Have you ever wanted to relive the colonial days of building up your settlement and the lands you claim ownership, without all the witch trials, attacking natives and deadly winters? Then “The Colonists” is the game for you.

“The Colonists” has three different rulebooks, one of which is a poorly written example game that was so bad two of my friend’s literally fell asleep reading through it.

It’s a player-interaction-based strategy game that takes the tile placement of “Suburbia,” the worker placement of “St. Petersburg” and twice as many cardboard pieces as both games combined. With four players it still takes a good hour to get everything set up, which is rare in this era of board gaming.

Each player is a landowner of a newly formed colony, built by randomly drawing tiles and placing them to that player’s advantage.

The overall goal as landowners is to make money from buying and selling resources, build buildings and make good relations with the other colonies. Each player gets three moves for the half-year, or turn, and and at the end of the year, the colony grows as players get to place three tiles down in whatever way they see fit.

The game can be as long as five hours, or as short as 30 minutes, as unlike most board games you can choose when to stop in the five eras, with each era lasting about ten turns.

The longer the game goes, the faster and more costly everything becomes. What resources are rare in one era become common in another, making monopolies practically worthless and long-term strategies a bit more effective as resources, tiles and cards create different paths to follow.

sense. Thankfully the shortest game mode is just a half-hour long, so while it’s confusing at first, there is room for practice rounds.

Overall the rules may be difficult to learn and need to be played out, not read out, to understand. For a worker placement game it’s fast-paced, simple in terms of goals and has the feel of powerful landlords shaping a new colony for your own gain over the years.

You can find the colonists on Amazon or wherever board games are sold.