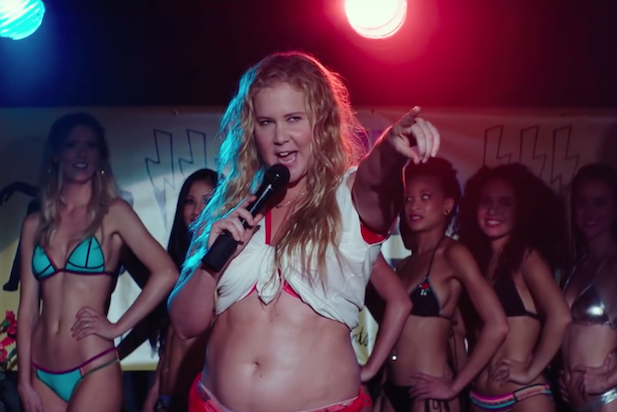 Amy Schumer performs on stage during a scene in her new movie, "I Feel Pretty."

Amy Schumer’s newest film, “I Feel Pretty,” hams its way through the cliché trope of inner beauty besting outer beauty, prompting few laughs and a lot of cringe in a rather reluctant-to-watch theater.

Schumer, who last starred in 2017’s “Snatched,” is undeniably charismatic; but it’s talent she lacks.

Re-emerging from a shroud of criticism, Schumer tackles self-image and the stigma of beauty in the only way she knows: C-level comedy.

“I Feel Pretty” follows the life of Renee Bennett (Schumer), a 30-something in desperate need of a makeover.

After Renee hits her head during her SoulCycle class, she reimerges a new woman—at least in her head. “I’m a Kardashian,” Schumer exclaims as the bewildered trainer comforts her in the hope of avoiding a lawsuit.

Renee then lives the rest of the film feeling “undeniably pretty” while never having truly changed—that is, until she hits her head again.

With a bloodied face and dissolved confidence, Renee promptly gives up on her dreams and returns home devastated.

A few chuckles were the most Schumer could draw from an unamused theater. The elementary scriptwriting only accentuated the poorly executed jokes. Most of them erred more on the side of cringey rather than funny.

But buried under dry comedy and poor writing lies something greater: spunk. Yes, Amy Schumer has spunk, and lots of it. Schumer’s exuberance overflows into every scene, and her energy redeems a majority of what could have easily been a flop.

Whether it be Renee’s naivety to those around her or the clear misperceptions she acts out, the intensity in Schumer’s performance is ubiquitous. It’s this same intensity that keeps the audience in their seats.

That, and the message that accompanies the film.

In her defeatist attitude, Renee realizes she still has one chance to prove that beauty is truly in the eye of the beholder and pulls a last minute stunt that captivates a skeptical crowd—and she lives happily ever after.

Yet, Renee also inspires the viewer. While the message is lost everywhere else, the ending reveals the heart and soul of the film in such an honest way, it feels as if Schumer is speaking directly to the audience.

But most importantly, “I Feel Pretty” is a call to women to band together, feel empowered and be the best versions of themselves—starting today.