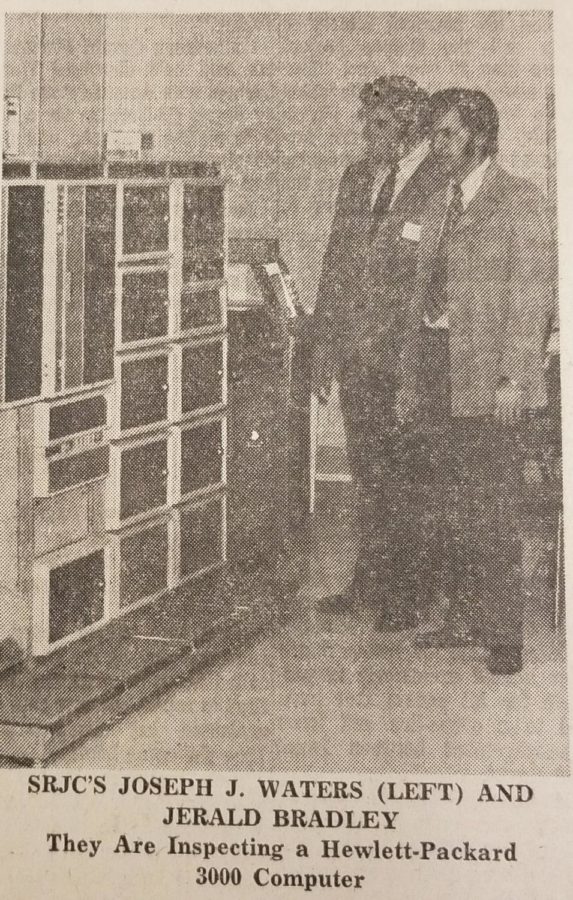 In 1974, The Press Democrat reported SRJC as the first community college in the nation to buy the Hewlett-Packard 3000. Providing its students access to the best technology available at the time.

Santa Rosa Junior College did not own a computer prior to the purchase of the Hewlett-Packard 3000. The computer was equipped with a 128-kilobyte memory, a printer and a magnetic tape drive. Adjusting for inflation of the original $200,000 price today would cost $1 million.

The machine was used for computer science classes and for the school’s daily functions. Before having this massive computer, SRJC sent students’ computer science homework to different schools and institutions that had the capability of running and testing the students’ programs. With today’s technology you can write, test and debug the program.

Evelyn Osten was working at the school during the transition, according to a transcript from the SRJC archives.

“I worked on the Doyle scholarships. I had been working on those for several years and were done by hand,” Otsen said.

The process was laborious. “We would pull their classes up, then we saw and made sure they were open. After we initialed them, punched and put the cards together, we gave them back to them and they were responsible to submit them for them to be processed and be punched into the data,” Osten said.

The process today is more streamlined. Students used to go into the office to submit applications. Now, there is no need to leave your bed to register or drop classes. Every classroom has computer access and most students use a smartphone with internet access.

As technology advances, new computers that fit in a pocket can do more than the 1974 computer that took up an entire room.

Take the Raspberry Pi for example. It’s smaller than a phone, faster than the HP 3000 and costs less than $50. Only time will tell where technological advances will take us in the future.