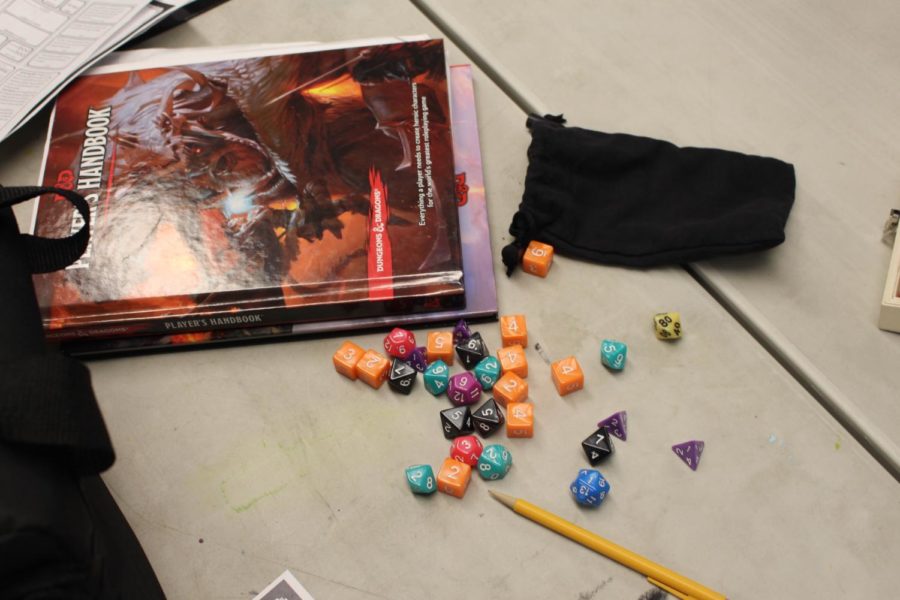 The gear of a D&D role player.

The tables were set. Books and bags of dice were unpacked and sheets of paper were placed on the table. One person sat at the head of every table. The others waited with a mix of terror and excitement as the dungeon master leaned in and said, “Goblins attack, roll for initiative.”

Owner Jean Elliott served D&D players and dungeon masters ordering donuts, Mountain Dew and Funyuns from the in-store snack bar. Said Elliott, “We stocked up the snack bar and rented tables and chairs,” Elliot said. “It looks like everyone is having a great time.”  Attendance was high, as there were 12 tables, with roughly eight people at each.

Besides the snack bar, there was a magic item trading post called “Fai Chen Trading Market.” The post consisted of a table full of cards and sheets, ran by the main organizer Robbie Pleasant and co-organizer Jasmine Lawrence. Players could buy items, to be used in-game at the event, with gold earned by their gaming character(s). They could also trade up to two magic items with other players, or the market itself.

Lawrence, an experienced D&D player, said that she started playing in 2012, with the 4th edition. She has been playing in the adventurer’s league for the past two years. “I really like DMing (dungeon mastering) 5th edition games due to the organized play system.” Lawrence said.

Event admission was $5, but fees were waived if you DMed one of the games.

When preparing for the last game of the night, I got to sit down with Robbie Pleasant. Mr. Pleasant helped start up the D&D organized play in Sonoma County’s own Griffins Nest and Fundemonium in 2016, Pleasant has been running and playing games ever since.

When asked if this ‘Epic’ game event is any different from normal play, he said, “Yes and no…organized play you often see multiple tables playing games. But for this we have multiple, as well as a table with 5 different unique magic items and approval to run what’s called an Epic.”

An Epic is a multi-stage, “World of Warcraft” style raid played with half of the room accomplishing one main goal and the other half a different one. In this case, the Epic was about a group of paladins and clerics who tried to cleanse an area of undead, only to create a deadly zombie plague that the local undead creatures, called Liches, are using to turn everyone into zombies.

Robbie and other staff go around as different characters to either help the players with spells and boons or release more zombies into people’s games. In another twist, if a character is bitten by the zombies, they become a zombie character and start wandering from table to table, trying to turn more players into zombies.

The first annual Dungeon Day was a massive success. Fun was had, and players of all skill levels got to enjoy an epic night of pure chaos. I would happily recommend this event to any D&D player, veteran or noob.