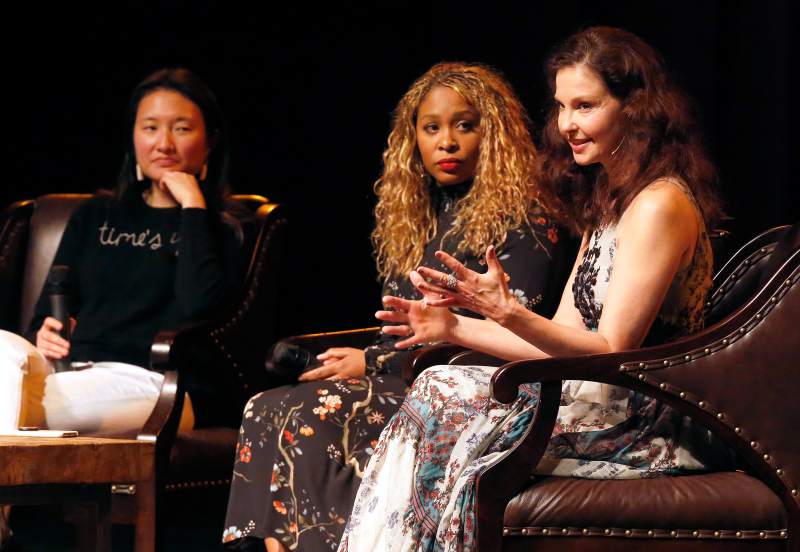 Three trailblazing women from three very different professions shared their experiences facing a misogynistic society and the unwanted, unwarranted, yet  normalized sexual advances that accompany such a climate.

The series, which launched in 2016, aims to bring local women together to develop a more succinct voice surrounding topics of interest and importance to all women, as well as to spark ideas to inspire change.

The speakers are among the silence-breakers, the women who, despite having no guarantee of support, risked  jeopardizing their careers and reputations. The women vocalized their experiences with sexual assault and harassment. With the #MeToo movement in full force since fall of last year, more women are coming forward with their own stories and having discussions in public settings While it is an unfortunate commonality to be united by, women gain empowerment through understanding that they no longer stand alone.

“It’s an exciting time to be a woman,”  Judd told the mostly female audience. However, despite this statement, none of the speakers believed that we are living in a 50-50 environment in terms of male-female equality.

“I was conditioned at birth to believe that I was inherently less valuable,” said  Meyer of her childhood. She was the third child and first daughter of a poor family in South Korea, who was abandoned at an adoption agency as an infant.

Meyer, a self-proclaimed “introvert without the heart of an activist,” expressed her initial hesitance to define herself as a feminist. However, following months of explaining away unsolicited advances by venture capitalist Justin Caldbeck, she now welcomes the platform on which she stands. Meyer was one of six women who accused Caldbeck of harassment,  The New York Times published her account last June. With the entirely female full-time staff of her company, Batch, she believes that making small changes can help pave the way for equality, “While it’s expensive, we offer market wages, unlimited PTO, paid health insurance and paid new parent leave.”

Iwu, director of government relations for VISA, co-founded We Said Enough, a nonprofit organization dedicated to eliminating discrimination and sexual harassment in the education and job settings, and published an open letter which was signed by more than 140 women that discussed the pervasive culture of sexual harassment and assault in politics.

The same shame women held onto that made them feel alone would ultimately be what tied them together. “How old were you when you realized men would always have a physical power over you?” she asked.

She emphasized that this movement has brought to light that we are not alone. Together as a collective, we are powerful, and silence is no longer an option, she said.

“I’m going to be honest, I don’t have stories of terrible sexual assault. I just have repeated stories of sexual harassment and diminishment and just really annoying stuff.”  Iwu said. She encouraged the audience to be vocal and explained that one or two women can’t create change alone.

“We have to re-evaluate together what it means to be patriotic,” Iwu said, who, as an advocate by trade, stressed the importance of privileged women’s involvement. She thanked the men in the room for attending and acknowledged that while they are half the problem, they are also half the solution.

As Iwu’s speech came to a close, Judd stood just behind the curtain. She knelt on the ground for a moment before coming on stage. While the first two speakers stood stationary behind the podium on the left side, Judd came center stage.

Judd’s accomplishments aren’t limited to the roles she’s played on screen. She serves as the Global Goodwill Ambassador for UNFPA as well as the Global Ambassador for Population Services International and for the Polaris Project. She wrote a Dean’s Scholar Award-winning paper titled “Gender Violence, Law and Social Justice” while earning her Master of Public Administration from Harvard.

Judd’s childhood was far from perfect. “There’s not a correlation between love and functionality or love and dysfunctionality,” she said. Judd spent the entirety of the 11th grade living alone after her parents just up and left. She’s since forgiven them and now has a loving relationship with both, but admits it is a miracle that she is where she is now.

Judd chose not to recount the incident with Harvey Weinstein in his hotel room, but touched also on an experience she had as a young child in search of quarters to play pinball. An older man attempted to touch her inappropriately, leveraging quarters as a reward. Judd joked, “I reached the up with which I cannot put,” and quickly told the nearest adults. They  told her that he was a nice old man and that she read the situation wrong.

While Judd demonstrated her ability to call out aggressors and deflect unwanted advances, she still had sympathy for those who didn’t have the same reaction,  “Every response in the moment is valid and appropriate for where the person is in his or her life and that it’s really okay to have spoken up or not spoken up.”

She was raw and real, explaining that even while being a humanitarian, she recognized that she also needed to heal herself. “We have to fill ourselves before we can have the audacity to try to give to others and to society,” Judd said.