Welcome Home, Jenny Sutter: The reality of a veteran’s homecoming 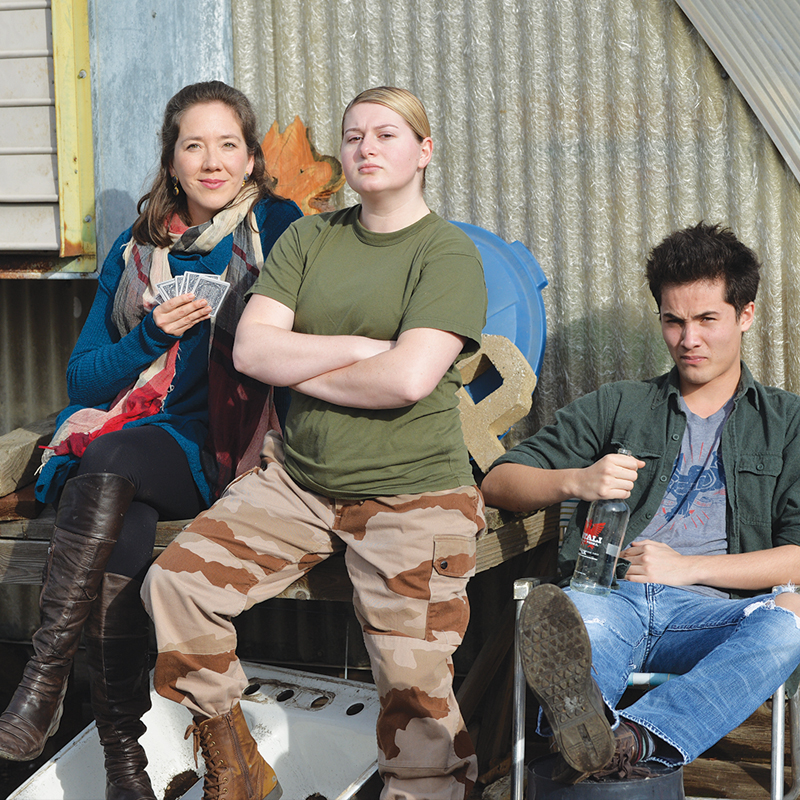 In the story, U.S. Marine Jenny Sutter arrives at bus station in California with no destination decided. Her mother and two infant daughters aren’t yet aware of her homecoming. Jenny’s journey leads her to a desert community known as Slab City, where she is nurtured back into society by an apparent group of misfit outcasts.

The supporting roles include kind-hearted Lou, who resorts to petty theft as a means of feeling closer to other; Buddy, the online ordained preacher, searches to help others; Donald, who in an attempt to avoid pain from his past, tries to maintain a state of indifference; Cheryl, a former hairstylist, who plays the role of Lou’s therapist.

Rechsteiner and O’Neil’s interactions on stage stood out. Their ability to play off each other in an almost improv-like manner made their performance feel less scripted and more realistic.

The play tackles themes of substance abuse, loneliness, grief, PTSD, self-esteem, faith and fear. The PTSD theme is especially relevant in light of the Friday events at a Yountville veterans home in which an Army veteran shot and killed three employees before taking his own life.

While not everyone’s struggles are as dark as some of what the characters faced in the play, everyone can relate to loneliness. Everyone can relate to not always knowing how to interact with others, especially after facing a trauma. The underlying message seemed to be empathy. The storyline prompted sympathy from both the characters on stage and the viewers in the audience.

Applause filled Newman Auditorium as the play came to an end, bringing some audience members to their feet.

“I thought it was excellent. My dad’s a World War II veteran, and I lost a couple of my high-school buddies in Vietnam,” said audience member Lana Verbon, a Santa Rosa local who enjoys coming to SRJC theater productions.

The post-show Q&A opened conversation between the cast, the director, three SRJC students who served in branches of the military and the director of the Office of Veterans Affairs.

Rechsteiner, who’s traditionally a comedic actor, made evident by the immediate switch in facial mannerisms from stoic and cold throughout the play to much more friendly and humorous in the Q&A, revealed that to play Jenny, she researched prosthetics and talked to a female veteran on campus in hopes of providing authenticity to the role.

She was forced to be vulnerable and joked “…more naked than I got,” referencing the opening scene, in which Jenny strips down to her underwear to represent the transition back to a civilian.

An audience member asked the veterans on stage how they felt about the recent murder-suicide veteran Albert Wong committed in Yountville on Friday.

“The news is portraying him as he lost it. I’m not condoning what he did, but I can understand,” said Stan Bragg, a veteran who spent 20 years in service and was recommended for “Pathways,” the same program that Wong was in.

“He, too, was a brother of ours,” Bragg said, in an attempt to bring awareness that Wong, despite his actions, was still a person. “I’ve been there and somebody helped me; now I want to do the same.” In response to the tragedy, Bragg plans to begin social work to aid veterans.

There seemed to be a mixture of optimism and remorse throughout the auditorium. Hopes that this incident would bring attention to the 20 veterans who commit suicide per day in the U.S. as well as remorse for the lack of support for returning veterans.

Actor Clein-Cunningham, a veteran herself, said it took two years for her health care to be instated. The insurance company couldn’t find confirmation that she had actually served.

“Years of therapy,” joked Clein-Cunningham when asked how she prepared for her role. Her performance was influenced by her very soft-spoken therapist, fittingly named Mrs. Lamb.

She said the theater offered her a similar support to that which she had experienced while serving. This sense of support seemed to be experienced by all the actors.

“Holy crap! I have a community now,” said Sayler, who played Hugo.

The cast members, as well as many former actors in the audience, expressed their appreciation for Director Wisely and her brilliance leading the production. Wisely hopes to bring attention to veteran students and the services available to them.

The actors made the hardships and strife of veterans, as well as civilians, accessible and relatable. It’s empowering to see an underrepresented female veteran showcased. All too often it’s the men who are recognized for their service and the women are forgotten.

The remaining show dates are:

For tickets, call 707-527-4307 or visit the box office at Plover Hall. Students with a Bear Cub Card have free attendance.