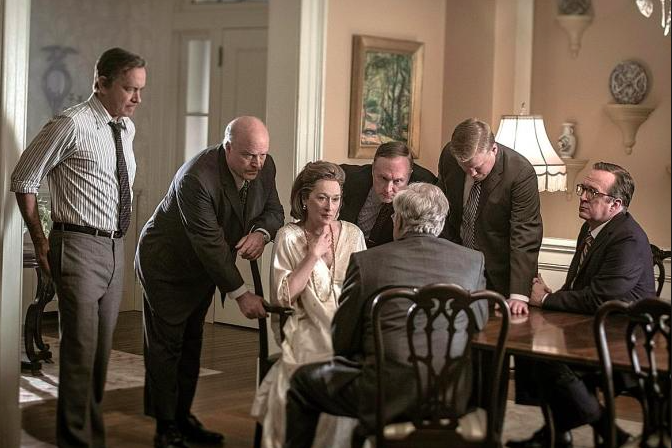 “The Post” carries a strong theme of female empowerment. Katherine Graham was the first female publisher of a major American newspaper.The film managed to give her the credit she deserves by making her character both charming and dynamic.

Meryl Streep delivers an excellent performance as Graham. She doesn’t immediately come off as the hard-hitting, dominant woman one might expect to see in a role like this. Instead, Graham is poised and a bit reserved. However, when the time comes to make a potentially fatal decision for the paper she inherited, she shows her true grit and makes history, against the advice of her male lawyers,.

Her expert team consists of familiar faces. Tom Hanks, as Washington Post Executive Editor Ben Bradlee, Bob Odenkirk as Assistant Managing Editor Ben Bagdikian; both of whom gave superb performances. The entire cast, from the main characters to the extras, did a wonderful job capturing the chaos of a newsroom in the midst of a groundbreaking time in American history.

Tom Hanks is exceptional, as always, as the raspy-voiced authoritarian Ben Bradlee, whose ambition to find and publish the Pentagon Papers nearly pushes everyone to the brink. Bob Odenkirk’s witty portrayal of Ben Bagdikian, the Assistant Managing Editor, had the small Sebastopol theater rolling at times. Some of the more humorous scenes felt almost improvised, but that only made the humor feel more natural and authentic.

While many renditions of true events and stories can feel too scripted, “The Post” felt more realistic. When Streep’s character finally gives the green light to run the story, instead
of a firm, “run it,” like the audience would most likely expect, they get a genuine human reaction to running a story that could potentially sink a growing company: an uneasy stuttering, “yeah, ok, let’s uh, let’s run it.”

The film’s strongest feature was accurately capturing emotions that didn’t feel forced. There were many setups for stereotypical lines, but it was pleasant that they didn’t take the bait.

Although “The Post” comes almost 50 years after the events transpired, it still speaks to the need of true journalism today. The staff at The Post risked not only the company’s future, but prison time to run a story that they thought the public needed to hear.