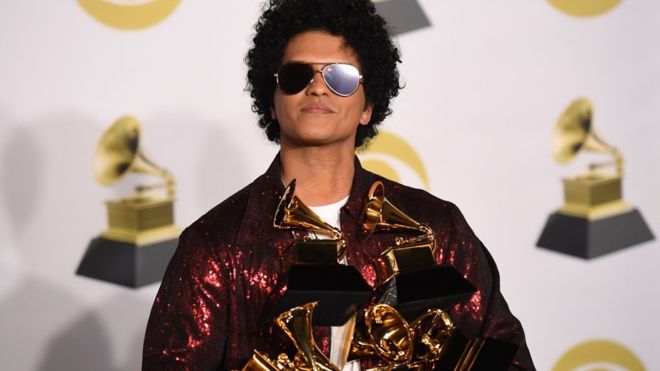 Bruno Mars is the big winner as he holds his six Grammy awards with a smile.

It came as a surprise to many as Bruno Mars took home six awards at the 2018 Grammys including, “Album of the Year,” “Song of the Year” and “Record of the Year.”

Mars frequented the main stage this year, cleaning house in the R&B category with wins for best R&B song, performance, and album. He also performed his hit track “Finesse” alongside Cardi B, who remixed the song late last year.

Kendrick Lamar won five Grammys including; “Best Rap Album” and “Best Rap Song.” However, many thought he would win best album of the year for his incredible album “DAMN” and people went to twitter and other social media platforms to vent their frustration.

Although the nominees were very diverse in ethnicity and musical style, it seemed that the Grammys had focused more on album and record sales to determine the winners rather than musical talent and creativity. Mars is a talented pop musician, yet lyrically inferior compared to artists like Jay-Z, Lamar, and Logic.

The band “U2” then followed up Kendrick’s performance, with comedian Dave Chappelle telling the audience afterwards, “the only thing more frightening than watching a black man be honest in America, is being a honest black man in America.” Kendrick Lamar then ended his performance set with a literal ‘bang’ as fake gunshot sounds filled the arena and his dancers crashed down to the floor.

Kesha also had a powerful performance with her song “Praying.” She seemed liberated after the long sexual abuse legal battle with her music producer, Dr. Luke.

Logic gave an eye-watering performance alongside Alessia Cara and Khalid in the hit single “1-800-273-8255” a song dedicated to suicide prevention. He concluded the performance with a motivating speech, “To all the beautiful countries filled with culture, diversity, and thousands of years history, you are not shitholes!”

Besides Bruno Mars and Kendrick Lamar taking over the Grammys, other notable Grammy wins were “Best New Artist” going to Alessia Cara along with “Best Pop Vocal Album” and “Best Pop Solo Performance” both going to Ed Sheeran.