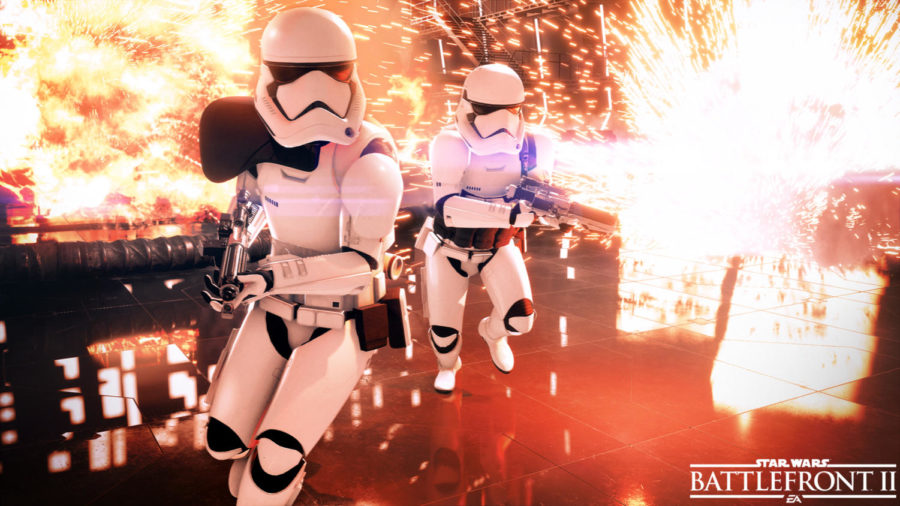 A screenshot of a Stormtrooper in BF2

Han Solo’s famous quote, “I got a bad feeling about this,” perfectly captures my thoughts on the new Star Wars video game, “Battlefront II.”

Battlefront II improves upon many of the mistakes made with the previous game, but a lack of depth and content limits its lasting enjoyment.

Currently available for $60, the game, developed by EA Dice and published by Electronic Arts, sticks to the same formula of previous Battlefront titles—large-scale, class-based combat with vehicles and Star Wars heroes —while attempting to add replayability and content.

EA and Dice have a history of producing some of the most visually stunning video games of the last decade, and Battlefront 2 is no exception. The graphics approach photorealism, with dense foliage and incredibly detailed character models. From the stitches holding together a rebel soldier’s uniform, to immense Star Destroyers, everything in this game is designed to dazzle, while still holding true to the endless Star Wars canon.

While we’re on the subject of canon, it’s worth noting that Disney and Lucasfilm approved all game content, meaning everything in the game fully upholds the larger ‘Star Wars’ narrative. All character models, weapon sounds and maps were built to mirror the movies as closely as possible.

The game’s greatest strength is its online multiplayer. A variety of modes and maps, spanning across all eras of the Star Wars timeline, provide enough content for endless replayability. EA and Dice have announced that all downloadable content for this game will be free, so you never have to worry about a lack of things to do.

In multiplayer, you start out as one of four base classes. As you progress through a game, you accumulate battle points, which can be spent to play as an upgraded soldier, a tank, a starfighter or a legendary hero. As a ground soldier, you die often. But when you save your battle points and unlock a hero, you are an incredibly powerful force, capable of wiping out rooms of enemy players and turning the tide of battle. This mechanic creates a dynamic experience, as you are constantly switching characters, guns and abilities as the level progresses.

One of the biggest complaints regarding the previous Battlefront game was the lack of good offline content. The multiplayer action was there, but people who didn’t enjoy that style of play were left with very little to do.

EA and Dice have addressed these. While the campaign does stun with visuals, it feels cookie-cutter in its level design. Much of the game consists of holding an area against waves of enemies, of which there are disappointingly few different types. Some levels do a good job of mixing aerial and ground combat, but for the most part, the missions become repetitive after the first hour.

The arcade mode tries to replicate the instant intensity of the original games, with mixed results. While the increased customization in regards to player modifiers like health and abilities, enemy count and type do add to the replay value, the lack of content in this part of the game makes it feel very tacked on.

You only have access to two modes, both with small teams and no vehicles. Maps are all small, close quarters affairs, with none of the epic battles found in the old games. There is no option for offline space battles. Overall, this mode is only good for several hours of play, before it becomes stale and repetitive.

It’s impossible to review Battlefront 2 and not mention lootboxes. The lootboxes are the main ways to unlock upgrades and skins for your online characters, but the developers removed the micro transactional aspect from the game after massive community backlash. The button to buy lootboxes remains in the game, but for now, it just takes you to a blank screen.

EA and Dice have released a game that improves on its predecessor. The graphics are a new standard for visual spectacle and realism, multiplayer is fun and immersive, and the story mode will provide several hours of entertainment, provided you are already partial to Star Wars.

However, I can’t see many people outside of avid Star Wars fans finding lasting enjoyment with this game. The multiplayer is nothing you can’t find in other recent shooter games. And because the rest of the game is lacking in content and depth, it doesn’t provide $60 worth of gameplay.