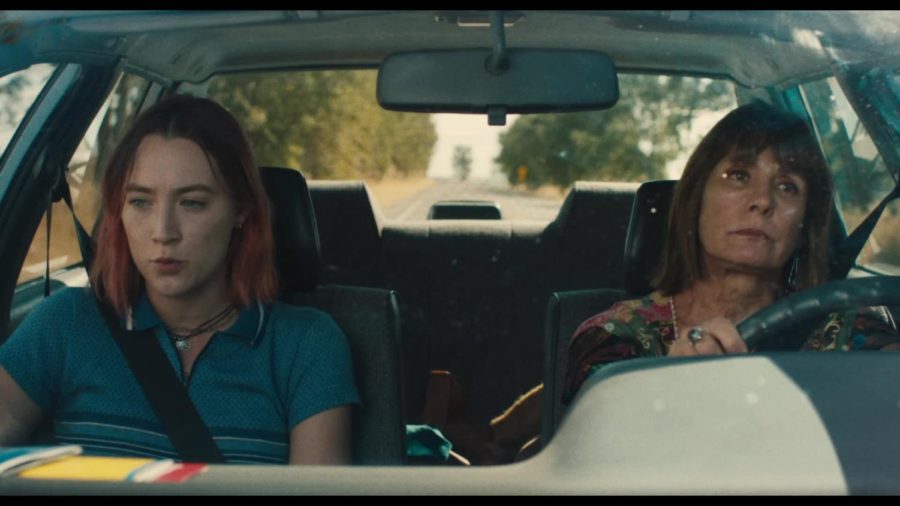 Everyone has a mother and that’s exactly Christine “Lady Bird” McPherson’s problem. Well, that and living in post 9/11 Sacramento, where the only exciting thing about being alive in 2002 is that “it’s a palindrome.”

The opening scene of “Lady Bird” takes place near the end of long car ride; the setting for a tense and heated exchange that only 18 years of mother-daughter dysfunction can produce. The back and forth becomes so unbearable it eventually drives one of the women to leap out of the moving vehicle. The rest of the film is an uncomfortable car ride that audiences are more than happy to ride shotgun in.

Like most charming, non-conformist, teenage girls saddled with the burden of small-town life, “Lady Bird” yearns for something more. She might not know exactly what and where that something is, she just knows that that “something” is more appealing than the “something” her life currently resembles.

“Lady Bird” attends an all girls’ Catholic high school in Sacramento, “the Midwest of California,” as she aptly puts it.

If you remove the ‘O’ in Sacramento you’re left with sacrament. This doesn’t seem to be a coincidence. The film’s setting comes off as more of an outward religious ceremony than a fully-fledged metropolitan area where citizens flourish and prosper.

In her senior year of high school, we see Lady Bird struggle with every relationship in her life; be it her friends, her love interests and her religion.

However, the relationship the movie is propped up around is the one that carries the greatest struggle, her mother. The film is a candid and artfully curated study in the dynamics between a mother and a daughter.

Writer and first-time director, Greta Gerwig, uses this dynamic to examine the intricacies of what “something more” means the way chemist Rosalind Franklin examined the intricacies of DNA. The molecular structure of both prove to be an extremely complex puzzle to solve. It’s a puzzle you don’t so much solve as you simply come to somewhat of a better understanding of.

Gerwig seems to have a solid understanding of what it means to be at the helm of a film. In the actor’s first effort as a director, Gerwig delivers a nuanced and studied piece that comes off as wise beyond the director’s years.

With “Lady Bird” Gerwig achieves multiple coups, showcasing that not only is there more than enough room in Hollywood for talented female directors, but there’s also room for movies about real people dealing with real issues in real life.

The immensely talented Saorise Ronan gives “Lady Bird” the depth and texture on screen that no doubt existed on the page. The role is further proof that Ronan has the chops to become the Kate Winslet of her generation-if she isn’t already.

The film plays like a cinematic scrapbook on the life of it’s creator, with Ronan channeling a pre-fame Gerwig, fully exposed for the masses to take delight in all her intrepid dilemmas and coming-of-age angst.

In the film’s opening car ride scene, Lady Bird expresses her desires to want to “live through something,” unaware that simply existing is “something” and that in it of itself should enough alone.

“Lady Bird” plays like the auto-biographical “something” director Greta Gerwig lived through. And by the end of the film, you’re glad she allowed you to re-live those moments with her, regardless of what that “something” is or was for you.