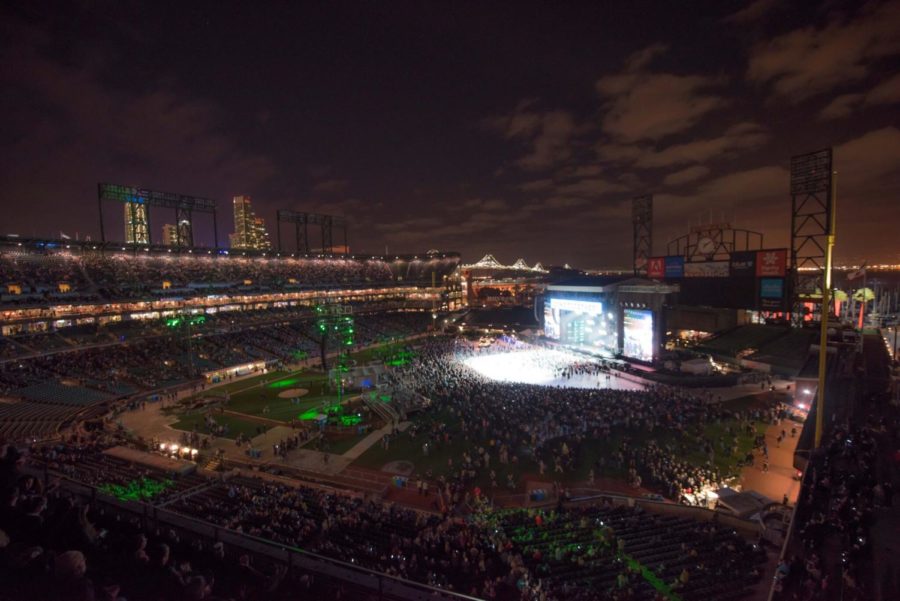 “To be a part of this line-up is a collective experience, the loud music, to help bring people together, to spread love and help out those in need,” Oakland native and rapper G-Eazy said, sharing his support for the North Bay.

Headliners Metallica and Dead and Company both donated their talents for free. San Francisco’s Tipping Point Company pledged 100 percent of the night’s $23 million earnings to go towards the victims of the most destructive fires in California history.

“I’m very proud to share the stage with a family of heroes,” Posey said, noting that the father and sons went door-to-door telling people to evacuate their homes.

Opening act soul-and-blues singer-songwriter Raphael Saddiq set the tone for the night as people began to dance and let go after a difficult month.

Punk-rock band Rancid followed after changing the scene to a grungy red and black set.

All general admission seating was reserved and donated to firefighters, first responders, volunteers and fire victims.

Catalina Davis, 21, a third-year SRJC graphic designer student attended the concert. “I didn’t know what to expect really. I was nervous and exited,”  Catalina Davis said. “My favorite part was seeing over 40,000 people coming together to support one another during this difficult time and singing along to Metallica and other acts.”

Emotional moments were reflected on the October fires with video tributes of the destruction in Sonoma County. People were seen holding onto each other for support as they looked back on their ruined homes.

“It made me happy to learn that 100 percent of the money raised was going toward the fire victims,” Lucianna Davis said. “I felt pretty sad looking back at the damage and seeing names of people who lost their lives during the fire, but at the end of the night, I felt nothing but hope.”

Between G-Eazy’s hyphy Bay Area tunes to Dave Matthews and Tim Reynold’s acoustic ballads, everyone came together to support one another. Positive energy surged throughout the crowd, a sign of relief after a tragic month.

“Thank you for coming. It’s a great honor to be here to stand together, work together and help people out,” said singer and guitarist Dave Matthews.

This five-hour event gave victims a chance to let go of their worries and dance the night away while listening to their favorite artists.

In between sets, Kate Hudson, Chris Rock, Ashton Kutcher and Katie Couric were among the celebrities showing their support through video compilations on the big screen.

Anticipation built as the crowd awaited the headliner, Metallica, to emerge from the fog to sing popular hits like “Nothing Else Matters” and “Enter Sandman.”

With the view of the Bay Bridge shining over the stage, it was a night like no other. Spotlights rained over the sold-out crowd as Metallica closed the night.

“I want to say an extra thank you to those who risked their lives to save others lives. We appreciate your service,” said lead singer and guitarist James Hetfield.