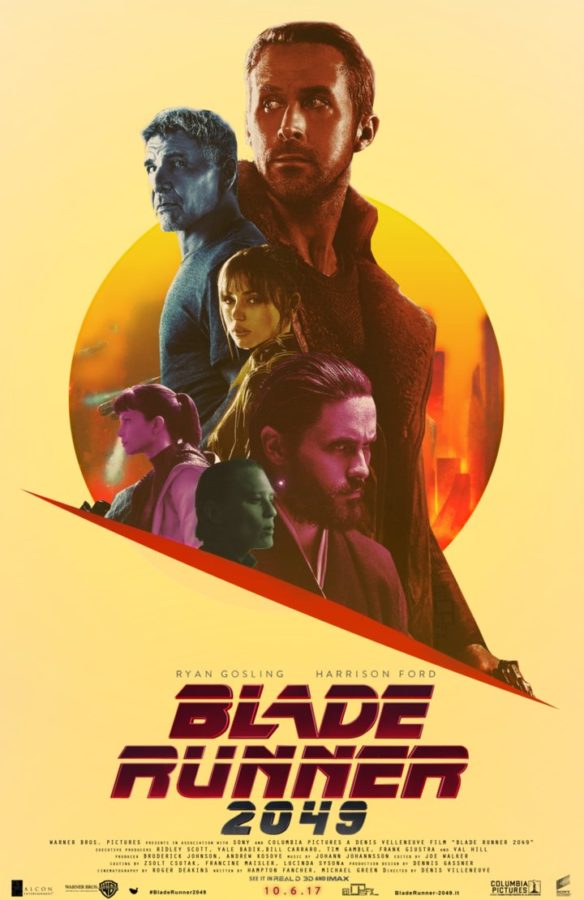 When you watch the ending of Ridley Scott’s “Blade Runner” you’re actually watching footage shot by Stanley Kubrick intended for “The Shining.” In 2015, Scott revealed this kernel of movie trivia to The Hollywood Reporter during a director’s roundtable: “By then I had talked to Stanley [Kubrick] a few times. I said, ‘I know you shot the hell out of “The Shining”, can I have some of the stuff?’ So at the end of the film in “Blade Runner,” that’s Stanley Kubrick’s footage.”

While “Blade Runner 2049” doesn’t feature any footage shot by Kubrick himself, his influence can be seen in every frame of Director Denis Villeneuve’s ambitiously extravagant and self-indulgent sequel to the 1982 film adaptation of Philip K Dick’s eerily relevant 1968 novel, “Do Androids Dream of Electric Sheep.”

Ryan Gosling plays a young blade runner named, K, a future cop in Los Angeles 2049, tasked with hunting down rebellious replicant robots gone rogue. When K discovers something as archaic as a box of bones buried underneath a dead tree at a replicant’s property, the find threatens to turn the entire universe inside out. From here Villeneuve plugs the audience into a two-and-a-half hour computer-generated algorithm of a film noir dressed up in bright neon hues and cold grey tones.

Villeneuve is a natural fit to helm a film populated by tortured robots struggling with the idea of real emotions, a strong case could be made that every character in each of Villeneuve’s previous films are replicants. Like Kubrick, Villeneuve’s films are events one is required to experience in the theatre given the recent output of groundbreaking works such as: “Prisoners”, “Sicario” and “Arrival”.

In “Blade Runner 2049” you marvel at the awe-inspiring visuals packed within the film, so much so that you find yourself wondering how the technical wizardry was achieved, in the same way Kubrick left audiences wondering decades before with “2001: A Space Odyssey.” Villeneuve channels Kubrick so much that he does so to a fault, “Blade Runner 2049” plays like a Kubrick film: you’re marvelling at the visuals while simultaneously wondering why it’s taking so long to arrive at its conclusion.

Kubrick isn’t the only cinematic legend Villeneuve channels, “Wild Bunch” Director Sam Peckinpah’s hologram is programmed into the film’s violence. Peckinpah was one of the first directors to turn violence into an artform, a ballet of of crude brush strokes soaked in bullets and blood. Villeneuve takes Peckinpah’s artform to the next frontier, transforming violent imagery into flawlessly captured high-resolution pixels revealing the essence of raw human emotion.

Villeneuve’s frequent collaborator and cinematography legend Roger Deakins implants his trademark look of a highly stylized yet hauntingly refrained brand of subtle light and texture that lends the film such a heightened sense of realism it feels as though you’re watching a documentary about the future sent back in time.

The sleek look of the film is accentuated by the Benjamin Wallfisch and Hans Zimmer score, a heavy dose of ominous chillwave absorbing the movie like a dense fog of icy reverberations; future sounds for a cold world of manufactured dreams and nightmares.

Gosling thrives in this world as K, evoking his role as the Driver from “Drive”, trading in the sleek, silk, scorpion jacket for a weathered, heavy-duty, black shearling coat while retaining the same philosophical principle of “actions speak louder than words” his characters have become notorious for. With his performance as K, Gosling establishes himself as one of the greatest “re-actors” to grace the silver screen, showing us that the right facial expression can convey as much as any salvo of dialogue.

Gosling headlines a strong cast, featuring a limited but layered performance from Jared Leto as replicant architect, Niander Wallace. Harrison Ford delivers a solid turn reprising his role as original blade runner, Rick Deckard. Ford’s performance in the film is one of the few times in recent memory from him that doesn’t feel like cameo-actor-for-hire fodder.

The most interesting aspect of the cast is the presence of strong female characters existing within the world. Ranging from Gosling’s holographic, Jiminy Cricket, girlfriend played by Ana De Armas, his all-business police boss played by Robin Wright and Sylvia Hoeks’ dominating performance as a femme-fatale replicant who would probably kick the shit out of the Terminator if the two crossed paths.

“Blade Runner 2049” certainly uploads everything an avid tech bro is looking to download, but it delivers something more, something the avid tech bro wasn’t expecting to find in the file sharing. The film delivers the notion that even in the future-a place built entirely on technological advancements-there is no greater element in the universe than the human one; especially if that human happens to be a female. Begging the question, “do tech bros dream of electric feminists?”