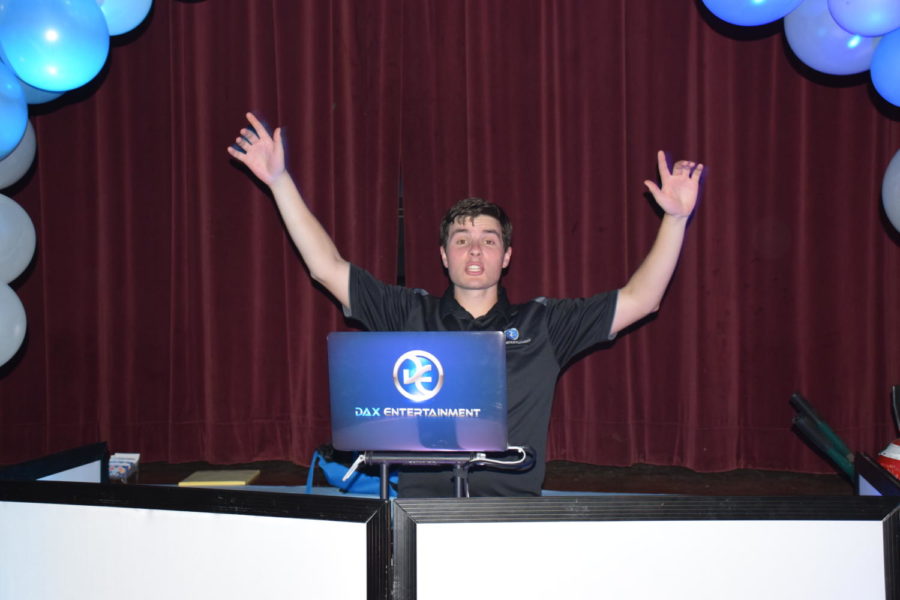 DJ Dustin having a blast behind the turntables as he prepares for a show.

On stage, DJ Dustin Everill is a superstar behind the one’s and two’s, off stage Dustin Engel, 20, is just another Santa Rosa Junior College student. He is one of the most requested DJs at local school dances, Project Grad nights and private events around Sonoma County.

Engel started his junior year of high school after reaching out to DJ Dax for an internship. A few years later, after being Dax’s stage hand, Dax hired him as a DJ with the company, Dax Entertainment.

With a Digital Audio Certificate, Engel is about to finish his third year at SRJC. He not only DJ’s, but produces his own mixed content also. The Oak Leaf interviewed Engel about his blossoming career.

I fell in love with electronic dance music back in middle school, especially dubstep. That was all I listened to, no matter what time of day it was. When I was a sophomore in high school, I went to my first rave and was blown away by how spectacular the show was. From that point on I was inspired to move forward and started producing my own music under a name I made for myself – Dustin Everill (or DJ Dustin Everill). Not too long after that, I started DJing house parties and other small events. I soon realized that I needed a mentor if I wanted to actually have a career in this industry.

Who has been your biggest inspiration in this industry?

As far as inspiration goes, it seems endless. I am mostly inspired by dance music producers such as Hardwell, KSHMR, and Axwell, but most of all, DJ Dax inspires me to keep working hard and stay passionate.

What keeps you motivated to continue being a DJ?

Sometimes it is hard to stay inspired and motivated. I have played my fair share of events where the crowd doesn’t like me, as well as many hours in the studio trying to figure out what to do next. It would be easy to quit after bad feedback from an event or after releasing a song and not getting the results I was hoping for; but I always tell myself that I am working for something bigger and it’s always worth it to keep moving forward – and that goes for everything!

What is one of the best experiences you have while being a DJ?

There are so many fun experiences I have had so far in my career, whether it be working with a really cool vocalist in the studio, or working for a multi-million dollar client with Dax Entertainment. However, the absolute best feeling is when you have a good crowd and drop that one anthem that everyone knows, and the crowd screaming is louder than the music. That is a sign that you are doing a good job and it’s moments like that which inspire me to keep going.

How hard is DJing?

With everything being software based, it is relatively easy for someone to pick up a mixer and pick up on it. The reality is that you can be the most technically skilled DJ on the planet, and your crowd won’t really care – most people just want to hear their songs played. The hard part is being able to read a crowd and choose what songs to play. Your number one job is to keep people out on the dancefloor. It is important to play what people want to hear, but it is also vital to mix it up a bit here and there. There will always be people that aren’t happy that you didn’t play their song or something like that, but it is vital to remember that you can’t satisfy everybody.

How random is your playlist?

Depends on the event I’m playing. I was DJing a pool party at Francis Ford Coppola Winery recently, and I was required to play strictly classic rock/R&B. On the other hand, at a Project Grad night for example, I will go all over the place with the music. The key is to feel it out.

What is your plan to bring the crowd up?

At Dax Entertainment we focus a lot of attention on the atmosphere of an event and crowd interaction. One of the ways that we do this is with special effects such as cryo jets and confetti cannons. We hype the crowd up with a hard-hitting song, usually an EDM remix to something popular and then when the beat hits, blast some cryo or confetti off. This gets the crowd moving every time.