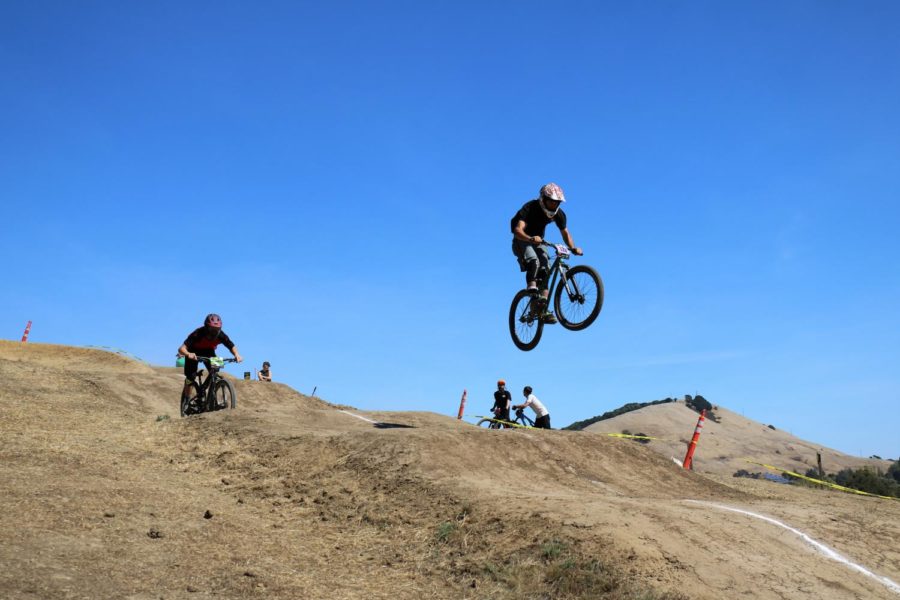 A rider sends the biggest jump on the course.

The park has been open since 2015, but Sunday’s event was the first official race.

The day started with practice in the morning, followed by a racers meeting at 9:30.

From there the different categories of racers competed in timed laps to determine who would qualify for the head-to-head finals.

After timed qualifying runs, racers competed in side-by-side heats, with the winner of each bout moving on to the next round.

The course consisted of jumps, rollers and tall banked turns, engineered with equal bends on each side to create a balanced course.

“From top to bottom, it’s fast, and pretty quick in the berms.”

Different companies donated prizes for the winners in each category. Mike’s Bikes, an online bicycle retailer, donated a new dirt jumper to be randomly gifted to one rider during the awards ceremony.

Marin County Parks employees and volunteers watered and swept the course between rounds to ensure that there was no deterioration over the course of the day.

Parks officials were matched in numbers by volunteers, creating a real sense of community at the event. Riders from all over the Bay Area and beyond came for a day of free racing.

“The intention of [the park] was always to have races. It’s been a few years in the building of infrastructure before we could actually get to this level,” Craig said. He expects this to be the first of many races held at Stafford Lake.

“We would love to see people using the facilities that we have here for other events,” Craig said.

The biggest thing people can do now to help, Craig mentioned, was volunteer.

“We have a dedicated staff, plus volunteer days every month, but we’re always looking for people to come out, resurface the berms, sweep and pull weeds.”

Despite being able to support an event like this, the bike park at Stafford Lake is only halfway built. Phase one involves everything currently standing: two pump tracks, jump lines, the dual slalom course and a small parking lot. Phase two will include more jump lines, a perimeter cross-country trail, a larger pump track, various skill zones and a play area for small children.

Craig wants the final park to be open to every age group.

“Families can come here and bring their children so everyone has something to do,” Craig said.

But the park still has a ways to go. Being that it is a grassroots effort, the vast majority of the funding comes from public and private donations. The group that manages fundraising for the park is called “Friends Of Stafford Lake Bike Park.”

One of the board members, Lauri Hammer, says that they have raised close to $1 million for the park. But they still have several years of fundraising before they will be close to full completion.

Hammer didn’t know when the next race was planned but was confident that there would be more to come. She said that these events were “absolutely” necessary to help raise funds for the park.

The future looks bright for the Stafford Lake bike park. The community was out in force and in such high spirits at this first race, it seems future races could be even more popular.

Visit staffordlakebikepark.com to get involved or make a donation.