Send in the clowns… on second thought, don’t! 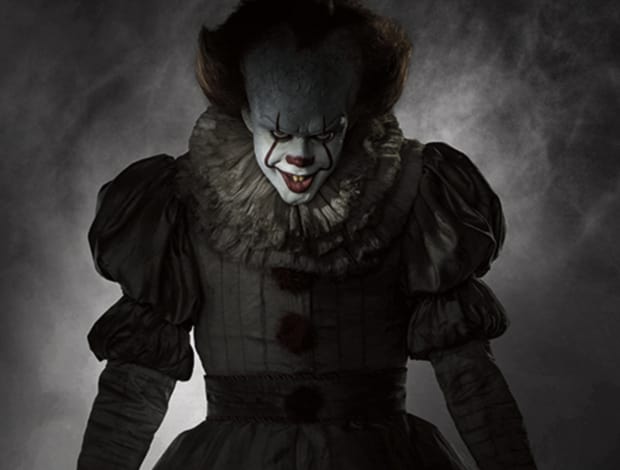 The latest adaptation of Stephen King’s 1986 horror novel allows the demonic clown to take center stage for the majority of the two hour and fifteen minute running time. On the surface, this seems like it would make for a frightfully good time, but when you delve down deeper into the movie’s sewers it becomes frightfully evident the film can barely float above water.

This latest incarnation  is set in the late 1980s, in the small town of Derry, Maine. The plot centers around a pack of misfit kids dealing with fears that come with adolescence, while also dealing with a murderous clown named Pennywise ,played by Bill Skarsgårdーthanks to a host of special effects. The latter proves to be far less traumatic than dealing with the loss of a younger sibling, an overbearing mother, a predatory father or being the only black kid in a town filled with white people. Pennywise appears every 27 years like clockwork, bringing red balloons and misery to a group of unfortunate souls residing in the equally unfortunate town.

Like the novel, the film works hard to remind you that “It” isn’t so much a devilish clown as much as it’s the fears we live with on the outside as well as the inside.

The film packs in a bevy of jump scares, but like the fears we deal with in real life, once the jump scare is endured, you realize there’s really nothing to be scared of; like experiencing  your first kiss or riding your first roller coaster.

There’s a set piece in the film featuring three doors inside an abandoned house, each with a warning scribbled in blood. The first door reads not very scary, the second reads scary, the third reads, very scary. If I had to choose what door this movie would be hiding behind, I’d go with door number one: not very scary.

The only aspects that were “very scary” were the unimaginative dialogue and the derivative tropes that stick to the movie like cotton candy, accentuated by the presence of a token black kid, Mike Hanlon, played by Chose Jacobs (“Hawaii Five-0”). Jacobs does his best with the role, but it seems as though his character’s existence was to function as the token black kid in an all white world and nothing more. There’s even times where I forgot he was in the film.

The rest of the film’s cast offers up the type of recycled, stereotypical characters moviegoers thought died off decades ago. But like Pennywise the dancing clown, they keep coming back every 27 years, torturing a select group of unfortunate souls.

The only actor who was able to keep their role afloat was redheaded tomgirl, Beverly Marsh, played by Sophia Lillis (“A Midsummer Night’s Dream”). Lillis delivers the only nuanced and engaging performance of the film. The role is reminiscent to that of Kerri Green’s redheaded eye candy in “The Goonies” –advantage Lillis when it comes to the battle of redheaded females living in ‘80s cinema. Lillis’ role is the only one in the film that manages to make the audience care about the character’s internal struggle more than the external one holding a red balloon.

Skarsgård turns in a decent performance as the psychotic Pennywise, but when you’re the monster in a horror movie, decent doesn’t cut it. You could remove the clown from the film and you really wouldn’t lose much. Think of what “A Nightmare on Elm Street” would be without Freddy Krueger? What would “The Evil Dead” be without the evil dead? If you remove the monster or monsters from a monster movie there is no movie. If you remove pennywise from “It”, not only do you still have a movie, but you have a movie that is exceedingly interesting and more terrifying.

With an over-abundance of main characters the film’s director, Andy Muschietti, who’s compelling 2013 film “Mama” was the reason why he got this gig, is unable to bring a compelling dynamic to the characters who deserve it the most: the kids. Rather, the film throws its weight behind the tricks of an underdeveloped circus freak.

The box office results for “It” show the demand of horror films in theaters, one of the last genres with enough drawing power to convince viewers to trade in a night of “Netflix and chill” for a shared experience with strangers. The demand isn’t the problem, it’s the supply. “It” attempts to paint itself with the same brush as the great horror classics housed in the genre. Unfortunately, like this group of misfit kids in the small town of Derry, “It” is haunted by far too many shortcomings; preventing it from truly feeling like a valuable contributor to the place it so desperately wants to call home.