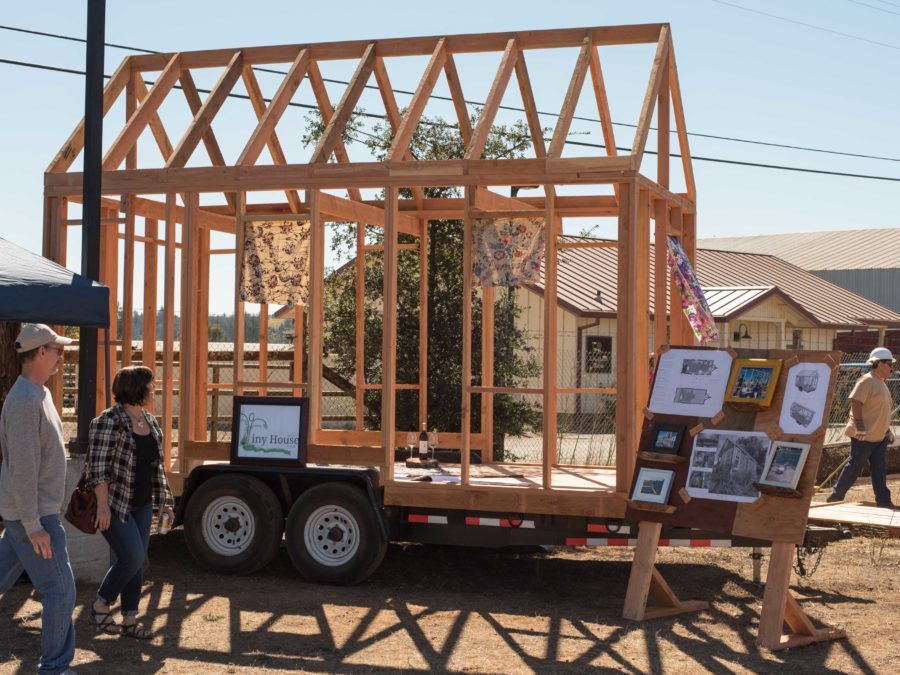 The Tiny House Club hosts a demo at Shone Farm Fall Festival featuring the skeleton of a tiny house and photos of constructed ones.

With rising rent costs in Sonoma County, Shone Farms is working away at its own solution: tiny houses.

The “tiny house” is a new trend based on the use of literal tiny houses. While the average square footage of a house in the U.S. is 2,600 square feet, a typical tiny house is between 100 and 400 square feet. With such a small size comes a small price tag, which fulfills a major goal of affordable housing.

Santa Rosa Junior College student Chelsey Kolbeck helped found the SRJC Tiny House Club, which is a product of the tiny house movement. She, along with club president Alan Hamilton, started the club with fellow students.

“Our members recognized a need for affordable and secure housing for students, future farmers and ranchers who are experiencing the high costs of education coupled with escalating housing expenses,” Kolbeck said.

Regarding their mission statement she said, “Our vision is to create a housing program that provides students with an opportunity to directly participate in the building and ownership of their own home, the goal being to provide students and future farmers with sustainable housing.”

Hamilton is the foreman of the club, leading the main construction of their model house. He has experience as a carpenter and has focused on tiny housing for a while. Other members help in  a variety of ways; Kolbeck makes bars, coffee tables and kitchen tables.

As the club is still new, it has not yet completed constructing a house. The club is currently working on a model to accurately estimate the cost of allowing students to live in the houses. “This model will generate its own electricity, harvest and recycle its own collected water, built from the milled wood of our own woodland forest,” Kolbeck said.

In addition, the club has set high goals. The club’s expectation is to have five to six houses on the farm, because of the average number of students on the farm per semester. However, the houses need to be cheap to reach the goal of making affordable housing for students. The club’s president, Alan Hamilton, estimates $25,000 a house but Kolbeck said she aims lower at $12,000.

To apply to live in a tiny house, students must work 12 hours a week on the farm and be a full-time student. Once accepted, the student will not only live in the tiny house, but will learn how to make one themselves. When the student graduates and earns their degree, they have the option to  “buy into” the house. If they choose to, they help pay for the house for a few years before assuming ownership of it.

However, housing isn’t the only form of new sustainability at Shone Farm. Produce first goes to fueling its own needs, before putting another portion aside for their CSA members and other organizations. If the farm has surplus past that, it usually gets sent to the food bank or compost. Kolbeck talked about a new process called “Value Added,” which used surplus to make canned goods such as jams, salsas, pasta sauce, and pickled beets using some of their more “unseemly” produce. These canned goods are then sold, fully utilizing the farm’s produce as well as putting some money back into the farm. Kolbeck also said that the money earned from Value Added could be used to help fund the club as well.

At the moment, the club is entirely dependent on Shone Farm resources. Since many members are involved with Shone Farm already, they have access to a mill as well as 120 acres of woodland from which they harvest wood to make furniture for tiny houses. However, this also means  they have little financial support.

“Right now it’s just pure donations,” Kolbeck said regarding the origins of their funds. “Any individual, any sponsor, any non-profit, large organization, corporation.”

Outside of donations, the club has a few members who are also culinary students. They help the club have bake sales. One of the earlier meetings was essentially a workday, when the entire club got together to push their agenda.

Along with continuing the construction of their tiny houses, the Tiny House Club plans to host a farm to table dinner on Feb. 20, 2016 to support this project.