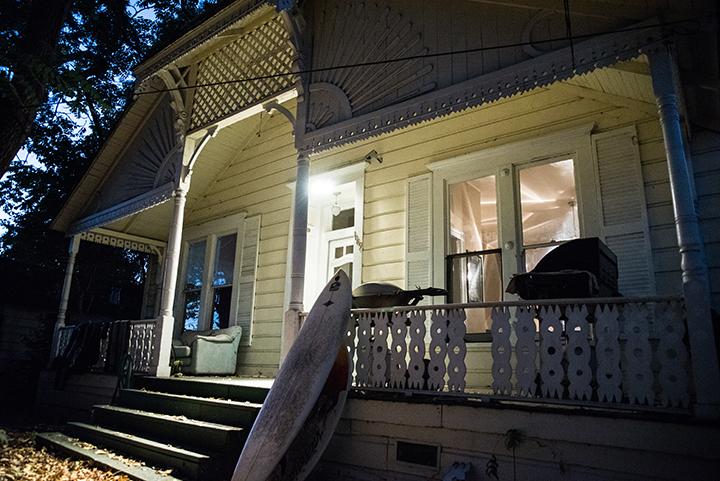 Footsteps creaked on hardwood floors while his family slept. He hid under his blankets, covering his eyes. He trembled as the footsteps grew louder and closer and then entered his room. He could feel an icy breath on the back of his neck, sending chills down his body. He peeked an eye from under his sheets. He could see a shadowy figure hovering above him. He swallowed his fear and threw up the covers to see nothing.

Bedtime bump in the night

Figueroa said a ghost lived in the house he moved into when he was 5 years old. He wasn’t bothered when his parents first told him the previous owner had died in their home while she slept.

He knew the presence he felt was the spirit who last lived there. His parents told him the next day he was just having a nightmare, but he was not convinced.

“How can you dream about feeling someone’s cold breath on your neck? It doesn’t make sense,” he said.

He has not seen the shadowy figure since, but he still hears the same creaking footsteps sometimes.

Oak Leaf Features Editor Haley Bollinger lived in a house with five roommates in 2008. Inside were many bedrooms, including one she shared with her girlfriend, Sarah, and a spare bedroom that was once a baby’s nursery.

Since she moved in, she had an eerie feeling she was not welcome. She believed a spirit brought negative energy and caused a lot of fights among the roommates.

One night Sarah and she got into a fight and Bollinger chose to sleep in the nursery alone. Before she fell asleep she turned her head to see the spirit of the man she had been feeling around the house.

“I looked behind me and I saw this ghost of a man in 1900s style clothing with a bowler hat on and suspenders. He was just kind of looking over me,” Bollinger said.

Bollinger ran from the room to find Sarah and tell her what happened.

The next morning she talked to her landlord and her roommate, Luna, about what she saw. They showed her a picture of the house’s original owner. To her surprise, the man in the photo was identical to the ghost she had seen the night before.

SRJC Alumnus Chris Szczech had a painful encounter when he attended a party at the same house Bollinger lived in.

“I can remember I was in a really bad mood. My energy was definitely negative, unlike the other times I was there when I was really happy,” Szczech said.

Szczech and his friend Mindy hung out in what looked like a parlor room. After sunset they were arguing when, out of nowhere, he felt a sharp, burning pain on the side of his face. He was confused when he saw Mindy’s reaction. Her eyes widened in shock at the sight of his face, telling him to look in a mirror.

“I went to the mirror and the side of my face was just bright red. It looked like someone had wacked me in the face,” Szczech said.

He couldn’t explain why it happened. He thought maybe it could have been some symptom of a medical condition, but it did not linger beyond that night. The thought of a spirit didn’t occur to him until the residents  mentioned unexplained events. To this day he can’t come up with a rational explanation to the painful ghostly slap.

On a stormy night many years ago, former Oak Leaf Co-Editor-in-Chief Jarrett Rodriguez hung out with his girlfriend at her house. They were alone and snuggled up in her room watching a Netflix movie. The room was once an office where her grandfather died. That night his girlfriend rose from bed and shut the window because it was windy.

The bedroom door burst open. Rodriguez assumed it was just the wind, but went to see if someone was there. When he saw nothing, his girlfriend got up and wrapped her hair dryer cord around the door so it wouldn’t open again. Two minutes later the door blew open again.

“[My girlfriend] was one who believed heavily in ghosts and spirits and had even told me about times she had seen or spoken to them, including her grandfather,” Rodriguez said.

To make sure the door wouldn’t budge they both tied it shut with cords and scarves. Knowing that they sealed the door tight, they went back to watching Netflix.

Suddenly the door shook heavily, as if someone was trying to open it from the other side. Rodriguez followed his girlfriend’s eyes to the bottom of a door where a mysterious shadow loomed, but it disappeared as he looked closer.

“We decided to just ignore it, and resisting every urge I had to run for my life, I just turned up the TV and drifted off to sleep,” Rodriguez said.

Ghost hunting in the night

In 2012, SRJC student Ron Cordova and his crew of six men visited a Sonoma cemetery to hunt for ghosts. After hearing people report seeing spirits and feeling strange chills, they decided to check it out.

As they walked through the cemetery they saw candles and pumpkins on the masonic tombstones that looked like someone had just lit them.

Going further up the hill they saw unmaintained graves from the 1700s and 1800s that had sunk into the ground.

“A few of us would lay over the graves to test whatever was out there. Everyone [in the group] pretty much believed in the possibility that there was something supernatural. Maybe not there, but in general, except for one person,” Cordova said.

Kyle, the one skeptic experienced something he would never forget. Despite dismissing it as nonsense, he thought it would be fun to come along with Ron and the others. The crew looked around trying to sense lurking spirits.

Suddenly, Kyle started freaking out, wanting to get out of there as fast as he could.

“He was very spooked and very creeped out, like he didn’t want to explain what happened,” Cordova said.

Cordova tracked him down. Kyle said he felt someone touch his shoulder and a cold breath on his neck. He turned around, but no one was there.