SRJC band of the week: Eye for I 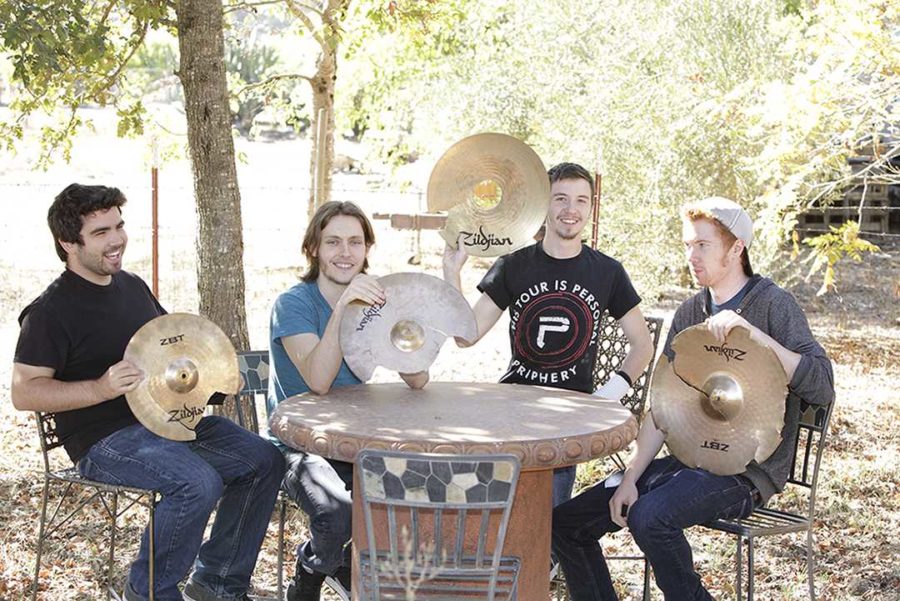 The Bay Area has long been a breeding ground for musicians. The Grateful Dead hails from San Francisco. Creedence Clearwater Revival formed in El Cerrito. Green Day originated from the East Bay as part of the punk scene in Berkeley. Santa Rosa band Eye for I is a new addition to the vast community of musicians in Sonoma County. The metal band draws their inspiration from groups such as U2, Dream Theater and Kansas.

Eye for I consists of bassist Jack Buller, lead guitarist/vocalist Daniel Townsend, drummer Nick Carico and rhythm guitarist Kyle Lino. Townsend and Buller are both full-time Santa Rosa Junior College students. Lino is an SRJC alumnus and now at Sonoma State University with Carico. Buller and Townsend met in their freshman year of high school at a rock music camp. The band started off with just the two of them, then expanded to six members, shrank down to two, and finally ended up in its current lineup.

The band members discussed their philosophy with the Oak Leaf:

Q: What is the best part about playing live shows?

Buller: “It’s really everything you do. Master your parts and have fun.”

Townsend: “The audience enjoys covers and classics. The crowd response to some of those songs is awesome.”

Lino: “The more important feeling for me is when you can feel the excitement in the crowd.”

Q: How often do you practice?

Buller: “We try to meet once to twice a week at best. It’s hard with school, and other band commitments. When we have a show scheduled, we practice as much as four times a week.”

Townsend: “[Lino] was new to the band and had to learn all the songs. When we practice, it’s usually about three hours. That usually includes an hour of us playing Super Smash Bros.”

Q: What can you tell us about your music videos?

Townsend: “They were all live. There is one upcoming video that will come out on Loud TV.”

Lino: “Loud and Clear Music Store in Cotati filmed them all for us.”

Buller: “I’m trying to contact my film major friends so we can do more music videos, but we want our album finished first.”

Q: What’s your favorite release to listen to right now?

Q: What works about the band?

Townsend: “It’s the chemistry. We get along great, and really love the music we make.”

Q: How many shows do you do in a year?

Buller: “It varies. When it was just me and Daniel, we did maybe two.”

Lino: “We are doing more shows now, but not as many as I would like.”

Townsend: “It’s funny how it works. You need a fanbase to play, but you need to play to have a fanbase. Our first priority is finishing our album, which is a bit hard.”

Q: How long does it take to make the songs?

Townsend: “We start off with the drums. We use GarageBand for that. [Carico] usually does one take. A typical song can be anywhere from one to 20 takes. The bass is the quickest part of the song making. We have to do a double track for guitars because there are really complex rhythms in the songs. The long songs take a long time to make. The vocals are the hardest because one in every five takes is a technical difficulty with our computer.”

Q: How long have you all been playing music for?

Buller: “Ever since the fourth grade when I started with a saxophone. When I was in middle school, I started playing guitar and bass.”

Townsend: “I started with the piano around fourth grade, then I moved up to guitar in middle school.”

Carico: “I started playing drums when I was in seventh grade. I really loved being in a rock band.”

Q: If you could be in any one band, which would it be and why?

Lino: “Definitely the Foo Fighters. It would be to calm a nation of sentiment and stylistic preferences.”

Townsend: “U2. Why? Because every show is sold out, but they always play the same old stuff. It would be that or Alterbridge because of the wonderful fans and energy.”

Buller: “Aristocrats, because there is a deep connection between the members.”

Carico: “Tesseract. They are a blend of Periphery and super cool vocals. They are groove oriented, and they have slap bass. That’s my choice.”