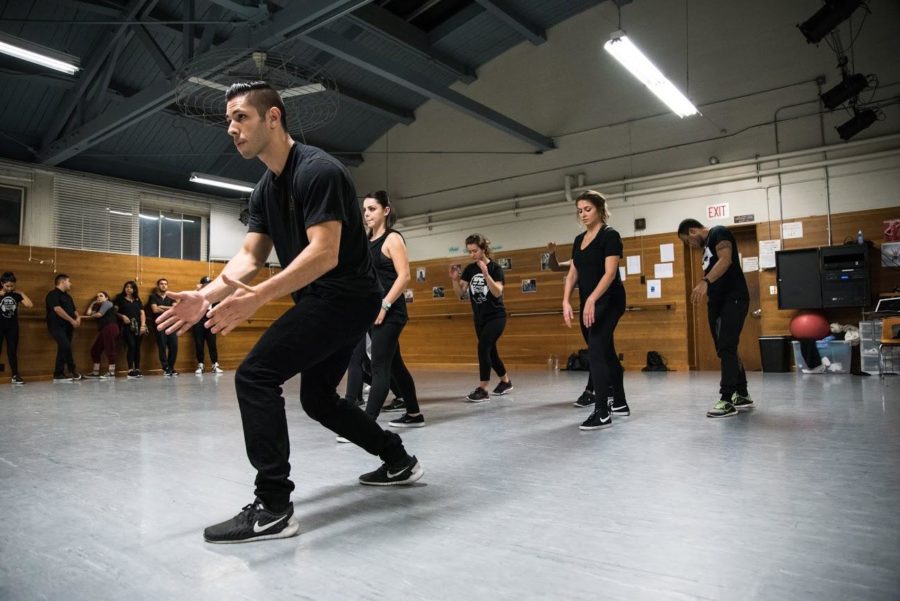 Auxiliary director Chris Medina drills a section of his dance team to perfect a choreography routine in preparation for a future event.

Movin’ and groovin’ is the name of the game for Santa Rosa’s aspiring dance team, Auxiliary.

The group formed from the spring 2014 SRJC Hip-Hop Dance Club. Former SRJC student Chris Medina first started dancing in middle school but took a hiatus until he developed an interest in hip-hop which inspired him to start a team of his own.

Medina wasn’t sure at first if anyone else would be interested in a dance team, but dedicated dancers were ready and waiting. Soon Medina had choreographers and experienced dancers come in and teach the club, its members slowly learning and training for their small performances, such as the Small Schools event and basketball half-time shows.

However, this year things are different.

“This year, it’s a bit more serious. We needed a commitment from people. We can’t just have people dropping in,” the team’s co-director Debbe-Ann Medina said. She is also an SRJC dance instructor and Chris Medina’s mother.

Since their transition from club to team, they strive for a vision much higher than basketball half times.

“After a while people were saying ‘let’s compete, let’s get more serious, let’s get better,” Chris said. This semester the team is more selective and held auditions over the summer to see who would earn a spot. Auxiliary plans to enter the North Bay Dance Festival in hopes a good performance will make them viable to enter other, higher-level competitions and events.

“Right now, we’re kind of just trying to compete at a higher level, but we still think it’s really important to stay with the community and do community shows and on-campus shows,” Chris said.

As a club, the team has performed at several events and venues in the last two years, including the Wellness Fair and Day Under the Oaks at SRJC. They also danced at the Roseland Cinco de Mayo Festival last year.

Members have to be dedicated if they want to compete. It requires hours of practice as a team and individual practice.

The team originally took on 40 members and since lost a quarter of them because they were unable to keep up with the choreography and intense schedule. The team does their best to practice Mondays, Tuesdays and Thursdays every week, alternating between Tauzer Gym and the Zumwalt Parking Pavillion, depending on availability.

Despite these difficulties, the team’s progress impresses Debbe-Ann.

Of course, competition isn’t everything. While the team aspires to reach a professional level, Chris made it clear this wasn’t his original goal. “My vision wasn’t, ‘I wanna direct the best team ever.’ My vision was like, ‘I wanna hang out with my friends, and I wanna dance and I wanna do everyone’s choreography.’ It was all for fun,” he said.