Don’t fear, the beards are here 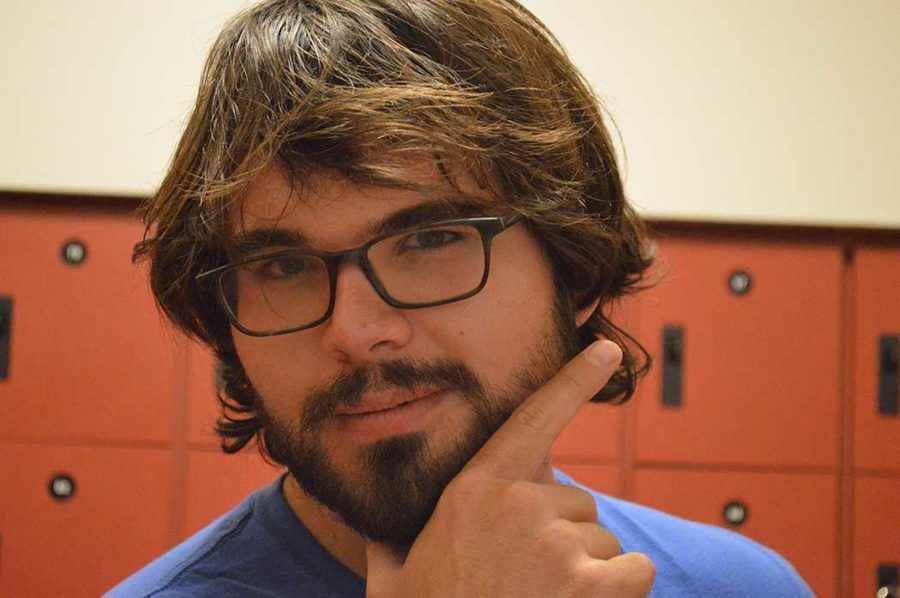 Eric Sadler strokes his beard outside of Bertolini Hall at SRJC.

Eric Sadler is embracing his laziness. He’s dropping the razor, tossing the shaving cream and letting his beard grow, like many male Santa Rosa Junior College students for No-Shave-November.

The goal of No-Shave-November is to spread cancer awareness, since many cancer patients lose their hair. People donate money they’d normally spend on shaving and educate others about cancer prevention.

November is less than a month away. However, this doesn’t mean you can’t start early. Let the scruff you’ve been shaving sprout freely.

Sadler did not participate last year, but this time he is ahead of the game. His main reason for letting his facial hair grow was sheer exhaustion because of work and school but with a fully grown beard, he is ready for No-Shave-November.

“Since I work at Student Health Services, we’re thinking of having November be a focus on men’s health, we’ll probably be doing something for [No-Shave-November]. I’ll be participating in it this year,” Sadler said.

However, you don’t need a specific month to let your facial hair grow. Others do it out of laziness or because of illness.

Like Sadler, SRJC student Thor Olsen chose to grow out his beard due to idleness, not wanting to shave for months. He had difficulty in growing one because it came out patchy. He stopped caring and grew it anyway, hoping it would fill in over time.

Psychology major Armand Beikzadeh first decided to grow out his beard when he was 19 and bedridden with pneumonia. When he shaved his facial hair off, he noticed other bearded people, like his co-worker, looked masculine. After growing it back again for a week, he saw how it made him look and feel, and decided to stick with it.

“It was around the time of No-Shave-November when my facial hair grew out. I looked it up and thought it was a really good cause, as it kind of represented men’s health,” Beikzadeh said.

Some go the natural route and others use razors.

Paul Press grows out his facial hair seasonally for fall and winter. He finds it important to groom his beard and mustache to keep it looking top notch.

“I use an electric trimmer, small clippers and a comb. When my mustache is long enough, I use wax to do the handlebar,” Press said.

Beikzadeh says he sculpts his facial hair in the morning. He trims the top and bottom then gets rid of hair on his neck and cheeks, making it look symmetrical.

Sadler doesn’t normally have time to shave. When he does he uses a safety razor, which has a guard to reduce the risk of cutting the skin, and a beard trimmer when wanting to get rid of a majority of it.

When it comes to facial hair, student opinions differ.

Olsen has gone a month so far without shaving and has received both positive and negative feedback from other students about his facial hair.

“When I first started growing it out. I was trying to be open about it, like, ‘how do you feel about this?’” Olsen said. “People I would ask would have mixed ideas. Some people are like, ‘I don’t really like beards in general’ and then I would get positive reactions like ‘your beard’s nice.’”

Beikzadeh receives nothing but love, especially from the ladies. He said they love him with a beard and told him to never shave it. He said that without his beard he looks baby-faced and less manly.

Press has never had a problem when it comes to kissing with his beard. He said that no one has refused to kiss him and many like it.

“My girlfriend finds it more itchy than anything else. She doesn’t really care when we kiss, but she likes it otherwise,” Press said.

For people who don’t know what to do with their beards, Beikzadeh advises that when you grow out a beard, sculpt it from time to time and let it grow naturally.

“No one knows if it’s for them or not unless they stop shaving and let their facial hair grow,” Beikzadeh said.

Sadler said to own your facial hair and be confident.

“A lot of people who grow facial hair might not be super confident in their own ability to grow it.” Sadler said. “[They might] feel inadequate because they are comparing it to others’.”

Embrace your facial hair and make it your own. Don’t shave and see how it looks. The way to know if facial hair is for you is to drop the razor and let your beard grow into hairy perfection.