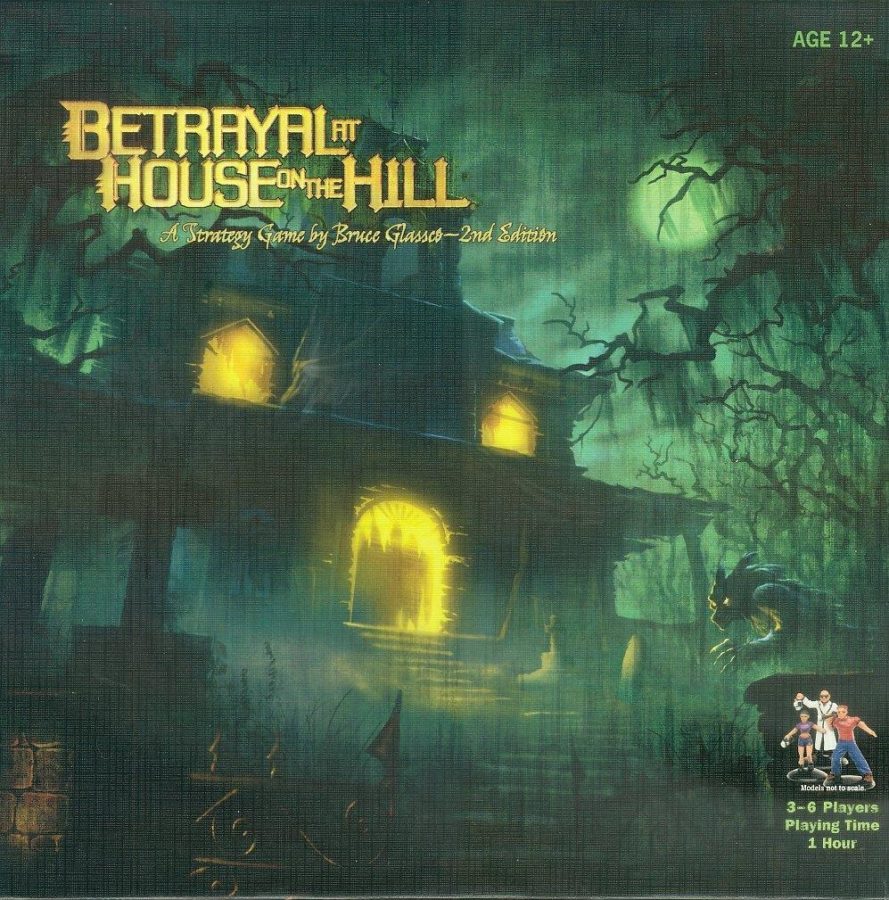 The 2010 updated edition of the game features spookier cover art and good ambiance for starting up the game.

Made by Avalon Hill and now owned and published by Wizards of the Coast, “Betrayal at House on the Hill,” is a semi-cooperative horror strategy tabletop game where you and up to six of your friends go into an old house on an creepy hill on a Saturday night, just like Scooby-Doo trying solve a mystery. But there’s a catch: one of the gang is a backstabber, sabotaging the case from the start.

You pick your character from your normal cast of horror archetypes from the cute, but still creepy, little girl to the old misguided scientist before setting their starting stats.

Speed is mainly used for how many spaces you can move in a turn, might is manly used for combat and the last two, sanity and knowledge, are for special events. Your team starts at the front door, which can’t be reopened until the haunt begins, and until then it’s just pure, randomly generated chaos.

You have access to explore an ever-growing three-leveled manor. You can explore the ground floor or second floor from the start, but the basement is easy to get into and very hard to get back out of.

You can run into any number of rooms based on classic and modern horror tropes, and the random tile system generator brings some interesting and out-of-place combos, like a dining room that leads straight to the graveyard right behind the locked front door or an operating room only accessible through a room full of random junk and over a narrow stone bridge. As you’re going from room to room you’re collecting items, stat boosts from events and omens help with whatever the game throws at you next.

The haunt is the endgame, which starts when a player draws an omen card. Then the player has to roll a six-sided dice going from 0-2 to see if the haunt begins. If you roll above the number of omen cards in play, you continue playing as normal, but if you roll below, then that’s when the horror begins.

As the haunt begins, you and all your friends are now killable, so if your stats drop to the skull on your character card, you’re dead and out of the game. Normally worse fates await you besides death itself and the traitor is revealed depending on what triggers the haunt.

It could be as simple as one of your friends having a bad case of lycanthropy and needing 30mms of silver by revolver followed by a good old stabbing with a magic weapon of some kind to an elaborate “Saw”- like trap involving a homemade bomb collar and the madman or woman hidden in your ranks. Or maybe you’ll just find something that messes with the fabric of reality itself, so there’s no traitor other than your own stupidity.

“Betrayal” is a well-rounded game that needs a minimum of three players. The room tiles are hard to shuffle and the sliders that come with the game keep sliding off the cards. You’ll need a big space to play in, as the table will fill up with tiles very quickly on some play-throughs. I give it four screaming people on fire out of five.