The Oak Leaf • May 1, 2014 • https://www.theoakleafnews.com/arts-entertainment/2014/05/01/srjc-premieres-spamalot-and-there-was-much-rejoicing-review/

SRJC premieres Spamalot (and there was much rejoicing) [Review] 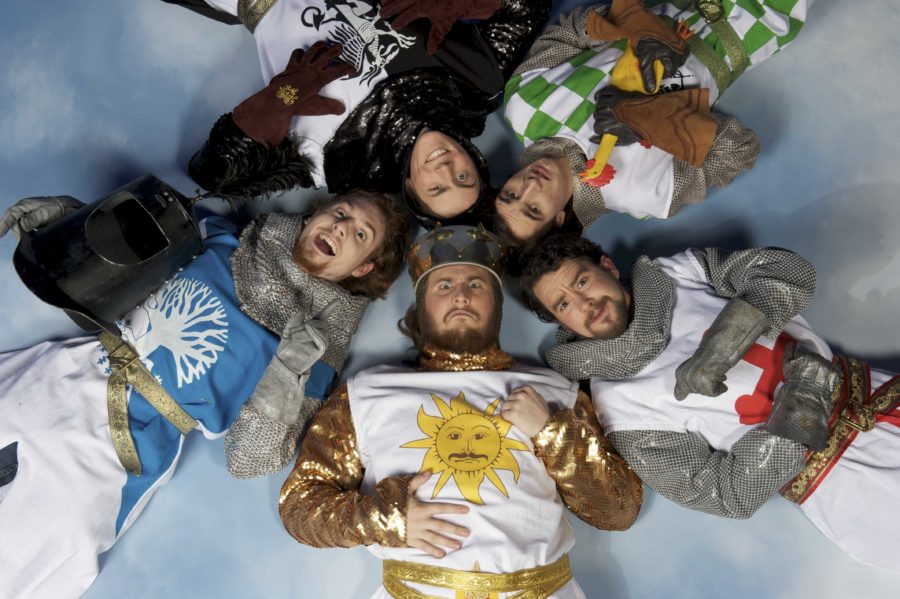 King Arthur (centered) and his knights of the Round Table pose in a circle.

Monty Python’s “Spamalot,” a hilarious musical adaptation of “Monty Python and the Holy Grail,” burst onto the Santa Rosa Junior College Burbank Auditorium stage full of errors, mishaps and mistakes, most of which were written into the meta-musical by the show’s delightfully devious creator. Directed by veteran clown and SRJC professor Reed Martin of Reduced Shakespeare Company fame, the play features singing, dancing, merriment and enough screwball oddities to mask the few mistakes that the show’s hectic opening night suffered.

The show starts a little slow, especially for fans of the original classic “Monty Python and the Holy Grail” with some of the classic jokes missing, or the timing of the jokes  changed in the translation to stage musical. In spite of this, the play quickly picks up steam when show stealer Adam Blankenship first appears and all expectations and comparisons between the movie and the magically meta-entertaining trainwreck of a musical cease. Blankenship, who plays Not-Dead Fred, Prince Herbert and Sir Robin’s Lead Minstrel, is a comedic tour de force, fantastically charismatic in every scene he is in, including the song “I am not dead yet,” which isn’t even about his character.

Eric Titus as King Arthur, the main-ish character, performed fantastically, with amazing vocal abilities and believable acting, even when he was not believing how bizarre of a show he was in. Titus was accompanied by a hilariously mismatched group of downtrodden knights, including the fantastic Sir Robin, played by Evan Held, and the gorgeous and talented Sir Lancelot, played by Erin Galloway, each with some of the most fantastic and flamboyant musical numbers in recent years. Carmen Mitchell plays Lady of the Lake, swooping in at dramatic moments to steal the stage from everyone else with amazing performances whether surrounded by her contingent on Laker Girls or by herself.

Each of these amazing actors are only as good as they are with the help of an all-star ensemble that highlights, harmonizes and high-fives them all the way through until the finale. Helping out their leads with emphasis, carrying heavy loads and sometimes just affirming that their leads are all alone, the ensemble and supporting cast take their smaller roles with a shrug and a fiercely determined grit that helps everything else shine.

Beyond differences stemming from the cosmetic change of screen to stage and structural changes endemic to becoming a musical, the show takes a large and dramatic turn away when it introduces the strange woman who lies in ponds and distributes swords, Mitchell’s fantastic Lady of the Lake. From here forward, there pass but gentle nods and turning of nethers in the direction of the Monty Python classic. Despite this, the show, written by Eric Idle, stands well on its own and is carried well on the capable backs of a great group of actors and technical staff.

The amazing technical budget and skill come clear at the end of the first number when close observers will notice Kot Takahashi change from the Mayor to Patsy in less than the time it takes to notice his absence. This quick change is the first of many, several of which take place on stage, including a purely magical change that Mitchell pulls off with a bit of simple but clever costume design from designer Maryanne Scozzari.

The scenery deserves an appreciative nod as well, as the set changes easily from Finnish village to castle to A Very Expensive Forest. The pieces provide more than pretty visuals; many add vertical dimensionality to the stage, giving the actors extra platforms, stairs and surfaces to climb on, of which they make very good use. Combined with excellent lighting and a clever projector screen, the stage itself takes on a number of different characters during the two-hour show.

Using an elaborately bordered projector screen, England, God and even spaces beyond or between the universe are brought to life, mixing the magic of digital media with good lighting design and strong actors. The thunder and lightning motif of God was detracted from slightly when they used the same strobe effect in another scene, but the first terrible time that God brought down the terror and groveling majesty, it worked fantastically.

The actors themselves suffered a few setbacks, from wig problems to codpiece malfunctions, but they didn’t let that stop them or even slow them down much. It wasn’t even until after the play while eavesdropping that the wig mishap, seeming to be an intentional part of the clever zaniness, was revealed to be a legitimate mistake. Even the more obvious codpiece malfunction was okay: the wearer dancing around, grabbing at his obscenely large, sparkling package in a number dedicated to how fabulously gay he is.

In fact, very few errors were so obviously errors that the talented cast couldn’t play them off as written into the meta-narrative of the show, or part of Martin’s screwball direction. The only slightly off-putting piece was the slight disparities in-between the fabulous sound design and the actions that the actors would make. In a show with so much physical comedy, a mistiming of even half a second between the thump and when the actor actually smacks himself in the face with a tome is jarring. With so many cues, a few are bound to go astray, especially in such a busy college production, and while they are never enough to come close to killing the gut-busting humor, they do matter.

All errors aside, the show was funny, beautiful and more than worth the time and money spent laughing through the smooth British humor. Find your grail and raise it in a toast to this fantastic production while picking up tickets.

Monty Python’s Spamalot opened April 25 and runs through May 3 with shows Wednesday, Thursday and Friday at 8 p.m., Saturdays at 2 p.m. and 8 p.m. and Sundays at 2 p.m. plus a special Day Under the Oaks showing at 3 p.m. May 4. Tickets are available online at www.santarosa.edu/theatrearts or at the box office in Burbank Auditorium for $10-18 except the Bargain Show April 30, which is $5-10. Associated Student People get a free ticket.