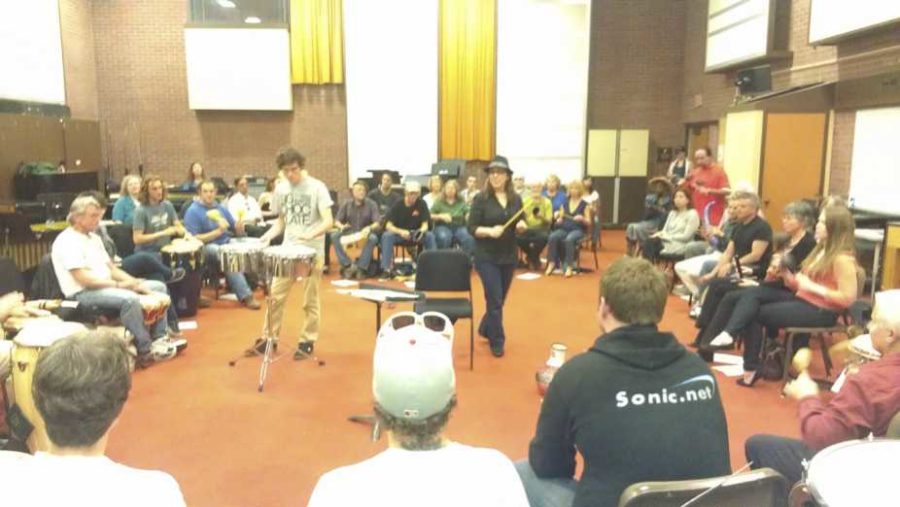 Rebeca Mauleón leads a hands-on workshop on the art and practice of Cuban polyrhythms in Forsyth Hall.

The best way to learn and experience how Cuban music is made is by putting both hands and feet in it. What becomes immediately obvious, even to an outsider, is that the heart of this music is in the rhythm.

A myriad of styles and genres, Cuban music has a long history. Though influences from Africa and Spain are dominant, this all-embracing music is shaped as well by the music of Europe, the Americas, pop music and jazz.

Mauleón began by demonstrating the clave rhythm pattern with two short, hardwood sticks called “claves.”  A five-stroke syncopated pattern forms the structural core of the music and holds everything together; singers, dancers, instrumentalists and most vitally, percussionists. This music is polyrhythmic: simultaneous rhythms merge and interact in flexible and fluid ways.

The clave rhythm begins as the music starts and continues without interruption until the last note. It remains in effect as a centrifugal force throughout the performance of a piece. It continues even when the music is silent during rests. The clave feeling resides in the music whether or not the claves or the patterns actually being played.

In Spanish, the word “clave” literally means “key,” and mastering the pattern is the key to Latin music. Just as a keystone holds an arch in place, the clave pattern holds all the various rhythms together.  Sometimes the pattern is just felt or imagined. It’s an invisible heartbeat that doesn’t need to be heard to be present. But the music can’t endure without it. “Don’t get fooled by the downbeats,” Mauleón said. Since the downbeats don’t get played, Mauleón moved her feet in time to indicate where they were. Cuban dancers don’t move on the down beats, but in between them.

“This music lives in collaboration with dancing,” said Mauleón.  “The repetitive patterns keep band members and dancers in time and locks them into the music. If people are standing around with their arms crossed while you’re playing, you’re in big trouble,” she said.

Workshop participants replicated the pattern on various percussion instruments such as congas, timbales, cowbells, bongos and wooden boxes called cajónes. Mauleón handed out sheet music with assorted clave rhythms written out as a focusing guide. Zeroing in on where those beats fell was easier for some participants than others, and some left before solving the musical math problem. More instruments, such as bass guitar, piano, vibes, flute and violin came into the mix. The interaction thickened until the workshop became a “descarga” or jam session, while the clave rhythm influenced the interplay of everything going on.

Inspiration gained momentum as the rhythms became ingrained. “Clave, shmave,” said Mauleón, “Just as long as it sounds good. If you lose the rhythm, just feel the music.”

The workshop established with practicality what Mauleón said in her lecture earlier that day: “Cuban music is an evolving history lesson. It’s evolving because it’s inclusive. From mountain country music to jazz harmonies to reggae and rap, the musical unions are thriving and long-lasting.”