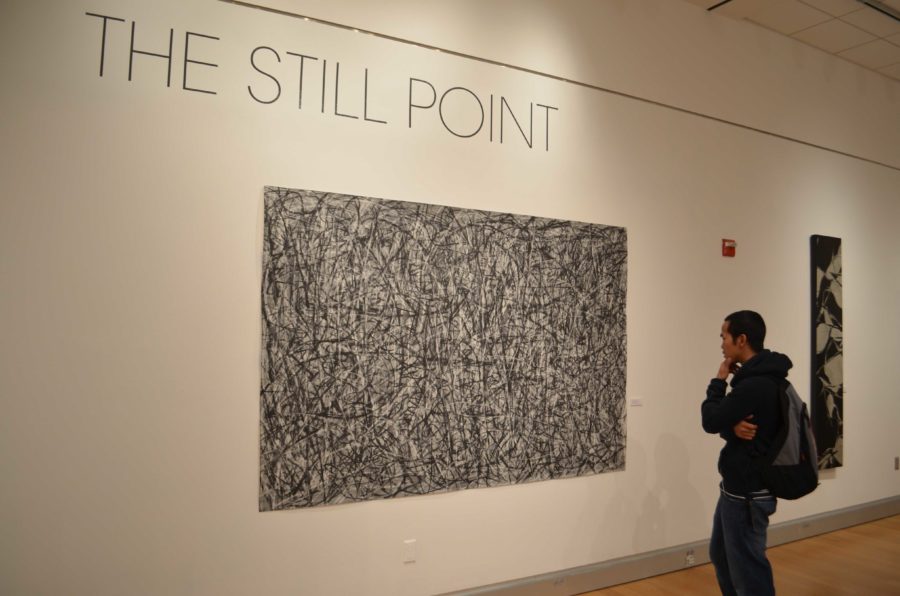 Abstraction in shapes, angles, black, grey and white drawings is the theme of the first SRJC art exhibit of the spring semester. “The Still Point” opened Feb. 4 in the Robert F. Agrella Art Gallery on the first floor of the Doyle Library.

Curated by art professor Suzanne Lacke with exhibited works by Judith Foosaner, Emily Lazarre and Connie Goldman, the exhibit allows viewers to trap themselves in the world of abstract art and design.

Lacke put the exhibit together through a collaborative effort with the artists and a common theme.

“It started out with Emily as a colleague and Carrie as well. I thought it would be great to get them all together to meet each other,” Lacke said. “Then Emily and I went to a show to see Judy’s work and it was wonderful. It seemed that the three of them together would make a wonderful show.”

Lacke said, “All three share a dedication to their process, to hard work and intense exploration. They use the basic tools of art: line, shape, color, space and value, to their vision and to express it. Dance, calligraphy, memory, music, science are some of the sources for their art.”

Lacke also explained the meaning behind the title of the exhibit. “We had lots of titles we were thinking about and for me there was a thought of the equilibrium, the still point, that all three of the artists reached at the end of their finished point of their work,” Lacke said.

Each artist’s work is in a different section of the gallery.

Foosaner created several pieces using different forms of black and white drawing, some in graphite and others with oil. A piece called “The Gathering” has a narrow width but is tall with black and sandy colors and several streaky shapes. Another piece, “Early to Bedlam,” is a charcoal drawing with various curvy lines of black, gray and white charcoal drawn onto canvas.

Foosaner explained what she wanted her pieces to represent. “I choose for a range of black and white and wanted all different aspects of what I do to be represented,” Foosaner wrote.

In her artist statement Foosaner explains how hard it can be for an artist to be creative and find new ideas. “For many months I did my paintings, all of which looked like black versions of earlier works minus the aliveness that discovery conveys. It was a difficult time, but I clutched the hope that my frustrations would eventually drive me over the edge and that, falling, I would see something new. It did and I have,” Foosaner said.

In the main room, Lazarre created several pieces that show oil-painted pieces of paper or cardboard lying on top of each other in various shapes. The painted pieces have different shades of blue, green and yellow like “Suspension” and “Staying Power.” Lazarre’s artist statement explains what the images mean.

“I cannot remember a time when my mind was not filled with images: the quality of light in a room, the shape of an object, the color of the linoleum floor. All have remained,” Lazarre said. “My memory dictates place and color and light. There is no way to change the facts: what was blue must be blue, and what was pink, is still pink. Abstraction derives from what is true.”

The second half of the room showcases Goldman’s works, “Doublet.” Goldman’s series includes 14 three-dimensional geometrically-shaped designs. The shapes are raised on the piece an inch-and-a-half above a flat white surface.

Goldman’s artist statement explains, “Most of my work is concerned with the tension between permanence and change, and the Doublets series expands on this theme,” she wrote. “It manifests itself in the apparent folding or doubling over of edges and corners of squares, the symbol I use for stability.”

“The Still Point” exhibit runs from Feb. 4 through March 7. There is an open panel discussion at noon on March 4 in the Robert F. Agrella Art Gallery at noon. For hours, check the Doyle Library page and select Art Gallery for more information.