Meet the Feebles: A Film for Halloween Enjoyment 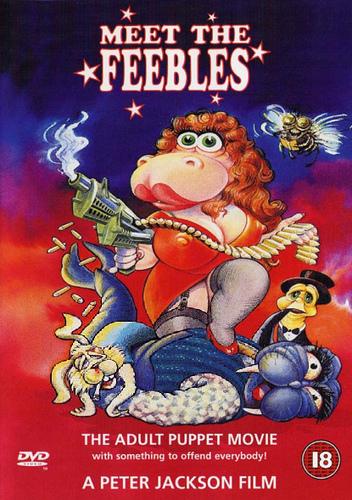 MEET THE FEEBLES video box illustration says it all.

Picture the Muppets having sex, doing drugs and killing each other – that’s “Meet the Feebles”, the second feature film from Peter Jackson, who later adapted Tolkien’s “Lord of the Rings.”

The story is an obvious parody of Henson’s “The Muppet Show,” revealing what might really go on behind the scenes of such a production — if the characters were living, breathing, talking animals rather than mere thread and fabric. Preparing to give a special live performance of “The Feebles Variety Show” amps up the normal chaos surrounding the troupe, as sex, jealousy, greed and violence reign supreme on the road to the Feebles’ ultimate fate.

Jackson and his writers skip specific parallels between their satiric twists and Henson’s originals, suggesting that most of their cast seem to be inbred cousins of Oscar the Grouch.

“Feebles” is not for the squeamish (nor children), but adults with a wicked funny bone will revel in the film’s glorious excesses.