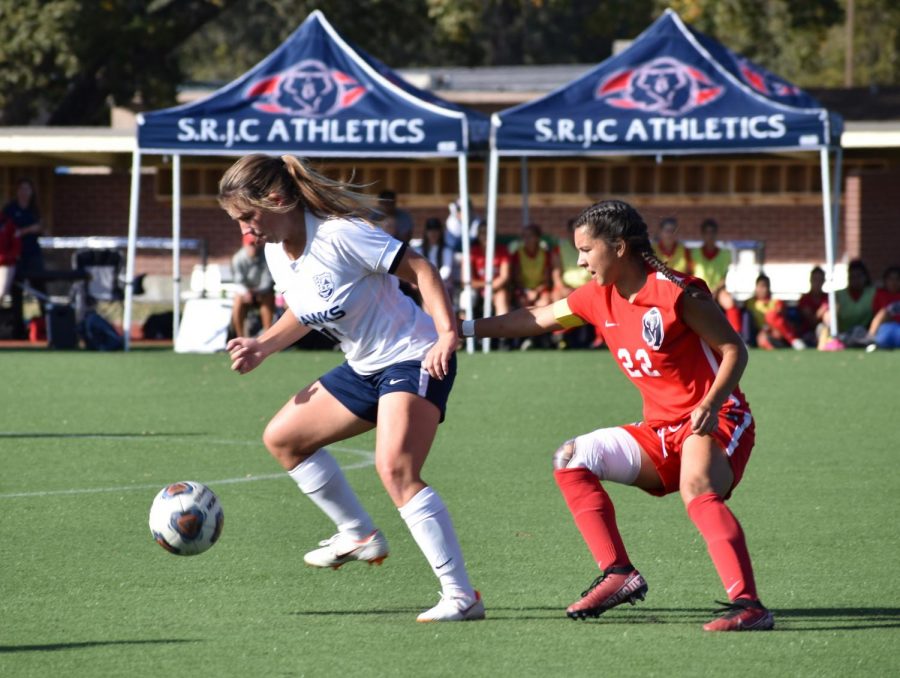 SRJC captain Gizela Carranza attempts to steal the ball from a Cosumnes River player during the Bear Cubs 0-0 draw Friday.

Figueroa made the diving save 10 minutes into the second half, and the game stayed tied at 0-0 until the final whistle. After the game, Head Coach Crystal Chadiez was quick to laud Figueroa’s work.

“I don’t know if I would really call her a backup goalkeeper. [She] and Morgan [Jernigan] have been pretty even throughout the entire year,” Chadiez said of the battle between backup and starter. “Jarley was our No. 1 goalkeeper last year so my confidence in her is through the roof. I have no faults that she can get the job done and she showed up.”

Jernigan, the Bear Cubs’ starter, missed the game with a concussion, but Chadiez hopes to have her back next week.

Overall Chadiez was happy with the way her team played considering its last win came Oct. 8, followed by losses at both American River and Sierra College. This was a meaningful tie.

“It’s been a long time coming for that. As a coach I took a step back and I tried to evaluate how I was coaching them, and I think it was a commitment from me to coach them different. Sometimes that’s hard,” she said. “As a coach you want to coach that one way you really know how, but it may not be the right way.”

The Oct. 15 loss at Sierra helped both the coach and her players.

Chadiez felt she got through to her team after the last two losses.

“What I really saw in individual roles is the commitment to do what we are asking them. It may not be really fun soccer to play, but they committed to the coaching points we were giving them. I’m extremely proud,” she said.

The Bear Cubs’ next game is Oct. 22 at Folsom Lake.