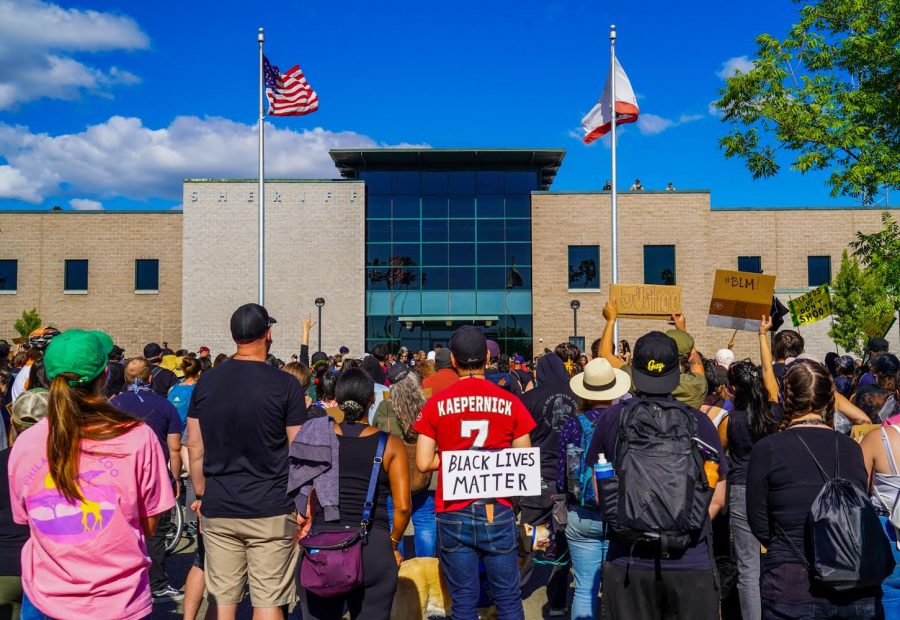 Students, faculty and citizens gather outside the Sonoma County Sheriff’s Office June 6, just a week after the killing of George Floyd.

This is a time of great social upheaval.

A time where the world’s most militarized police force is exacting violence on Black people across the country.

During a global movement, it can be hard to keep sight of local issues, so here are the perspectives of Black students and faculty in our own Santa Rosa Junior College community.
George Sellu, agriculture instructor
While we are all discussing the murder of George Floyd, I want to remind folks that this horrific event is not isolated from the structural and institutional racism that is alive and well in the U.S. and at Santa Rosa Junior College.

I am heartbroken that some of my colleagues do not seem to understand that institutions in the U.S. are implementing policies that are at their core enabling and enforcing racism. When are we going to genuinely examine our policies with an antiracist lens?

Based on what I have read on this thread, I believe that some of our colleagues might argue that we are doing fine in Sonoma County and at SRJC as it relates to race relations.

That could not be farther from the truth.

As a fairly educated Black man, I attempt to carry myself around pretty well, and I am constantly harassed in Sonoma County. I can only imagine what our Black students are going through.

In my first two years at SRJC, campus police were called at least twice to check on me, a Black man, walking into Lark Hall on a weekend to prepare my lessons.

One of my colleagues called campus police and this tells me that the Amy Cooper effect is alive and well at SRJC.

In order to fix that problem, I had to go to the police department and introduce myself. How many of you have done this?

And I have had worse interactions with Santa Rosa PD. I always have to think about how I dress and how I interact with people in public spaces. And I still get harassed.

While we continue to enforce racist policies, to assume that racism is not as pervasive in our community as others is more dangerous than overt racism.

We must start addressing racism in our departments, on our campus and in our community with clear, intentional and decisive actions.
Anferny Moore, sociology major
My experiences with racism have deeply affected who I am today.

When I began public school in Texas at 6 or 7, my mom sat me down and let me know that people may treat me differently because of how I look.

I will never forget that conversation, or the one I had with her as a teenager about the existence of bad people in the justice system and law enforcement. People who could take my life.

I’ve been ostracized, harassed and abused by our society, which led me to gain an education in history and different aspects of societal oppression in things like government, education, finance, housing and nutrition.

After living in Texas, Kansas, Missouri and Montana before California, I thought I had experienced everything life could throw at me. I knew at this point I would have to work harder than ever to take advantage of every opportunity given to me.

Three years into attending the JC, I hadn’t encountered anything too unusual, as far as racism goes, besides the occasional night classes where even people in groups would go out of their way to avoid me.

Throughout my time at the JC, I never felt as if I did not belong, thanks to the many different clubs and opportunities to pursue any goals you had.

Now, in the wake of the death of George Floyd and the global protest it inspired; in the wake of curfews nationwide oppressing Black lives; I am literally an emotional and mental mess.

The support system I’ve relied on for the past three years through the pandemic, wildfires and more is yet to make a stand and provide support for its Black alum, staff, students and community.

Dr. Chong’s letter was sent with remorseful words like “I have felt anger, guilt and helplessness.” I don’t want to hear these words from a man with so much power and influence, a man I looked up to.

I need action from my school; the kind of action I know the JC is capable of. Allow students to protest on campus and help Black students and alumni who just need to know someone has their back through their financial or emotional troubles.

I have been afraid to voice my opinions and provide the school with feedback, but as things have progressed, I am now demanding change. Change begins with renegotiating the contract the school has with the local law enforcement and providing Black students with additional support since the school is receiving funding for having such a diverse population.

These are things I think will benefit the community and show that the school and administration is not only accepting responsibility for enforcing policies and agendas that further divide and alienate us, but also provide healing and solutions. I have two simple words for the SRJC community: do more.
Summer Winston, graphic design program coordinator
Once, in a department meeting, one of my colleagues referred to humans of Asian heritage as “Orientals.”

I waited, looked around the room, and no one spoke up. I was hurt and outraged, because in that moment I learned so much about the folks I work with.

After the meeting I went to her, reminded her of her statement, told her it was not acceptable, and her response was to double down.

As one of the few full-time tenured Black and Filipinx, non-binary, and queer faculty members, I am often the only one in the room that looks like me. And I feel it.

I speak up on issues when others don’t. I’ve been on the receiving end of disrespect from colleagues. I’ve been treated like I’m the problem for saying something in defense of myself. I’ve witnessed colleagues, under the guise of defending their pedagogy, strongly oppose equity work on our campus that would directly benefit our marginalized student population, and to be honest…

It’s beyond disheartening. All of it is.

Our systems are a reflection of the systemic and institutionalized racism and barriers that plague the whole of our society. Our campus is not a bubble, and change must come.