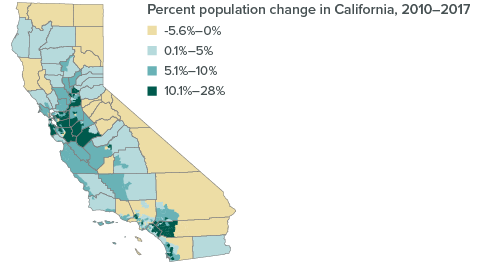 2020 Census data will determine federal funding and congressional representation for our state; an undercount could cause the state to lose federal funding for a number of social programs that benefit low-income families and communities of color.

The 2020 U.S. Census is coming up, and it can be difficult to participate in a democracy that you don’t fully understand. This Oak Leaf guide explains the U.S. Census, held every 10 years.

What is a census?

A census is a count of residents within U.S. states and territories.

The U.S. Constitution mandates that the U.S. Census Bureau conducts a nationwide census every 10 years to gather data which will determine funding for community services and ensure proper representation for U.S. residents. The first U.S. Census was in 1790, and there has been one every decade since.

The census also determines how much federal funding is allocated to each state from the federal budget. California received $105 billion in federal funds in the 2017-18 fiscal year, according to California Budget and Policy Center.

At the state level, census data dictates how state assembly and state Senate boundaries are drawn.

How does the U.S. Census affect me?

The 2020 Census will yield data to determine how much funding is given to dozens of programs including school funding, child care, road maintenance and social assistance.

Census data will also determine where new hospitals will be built, improve health programs and increase job and business opportunities.

Businesses use census data to decide where to build factories, offices and stores; developers use the data to revitalize neighborhoods and build new homes; and local governments use the data for public safety and emergency preparedness.

By making a full count, Californians can ensure their communities receive the resources they need.

Are my answers safe from law enforcement agencies?

Despite Trump’s intending to add a citizenship question, Census 2020 will not ask whether the person filling out the form is a citizen.

But even if there was a citizenship question, census data can not be used for immigration enforcement.

The U.S. Census Bureau is bound by Title 13 of the U.S. Code to protect information gathered in the census. Private information from the census can only be published after 72 years for historical purposes and only in the National Archives.

The last year the U.S. Census featured a citizenship question was 1950; the form asked for place of birth and in a separate question asked, “If foreign born — Is he naturalized?”

The 1960 U.S. Census asked only for place of birth. Between 1970 and 2000, 1-in-6 households were sent a long-form questionnaire that included a citizenship question, but no U.S. Census has ever directly asked for the citizenship status of every person living in every household, according to NPR.

What is it going to ask and why?

How many people are living in your home on April 1?
This provides a count of the entire U.S. population.

Is your home rented or owned?
This produces statistics about homeownership and renting and helps administer housing programs and planning decisions.

What is the sex of each person in your home?
This provides funding for government programs and enforces laws, regulations and policies against discrimination.

What is the age of each person in your home?
This provides funding for government programs supporting children, the elderly and other age groups.

What is the race of each person in your home?
This helps federal agencies monitor compliance with antidiscrimination provisions like the Civil Rights Act and Voting Rights Act.

What is the relationship between each person in your home?
This funds government programs that support families, including single parents. With so much at stake, every Californian must be counted by Census 2020, including undocumented and homeless residents.

How do I participate?

The deadline to be counted is April 30, with the government asking where you lived on April 1. The questionnaire will be available in hard copy, by phone and, for the first time, online. The U.S. Census Bureau will deliver the results to the president in December.

Video and printed guides will be available in 59 non-English languages. An ASL video and a Braille guide will also be available.

Final postcards will be mailed April 20–27, along with an in person follow up. The U.S. Census Bureau will follow up once more with nonresponsive households in May.

Everyone who lives in your home on April 1 is to be counted in the household census, including children who live at home, children splitting time between two houses (as long as they live in your house on April 1) and newborn babies, even those still in the hospital and those born on April 1.

Can I get a job working on the census?

Those interested in supporting their community by ensuring all are counted can apply for a temporary part-time job as a census taker at 2020census.gov. In Sonoma County, census takers work flexible hours and earn between $19 and $21 hourly in addition to reimbursement for work-related mileage and expenses.

For any other questions, visit census.ca.gov or visit the Sonoma County census office at 575 Administration Dr., Suite 104A in Santa Rosa.