Pliny the Younger: Well worth the wait 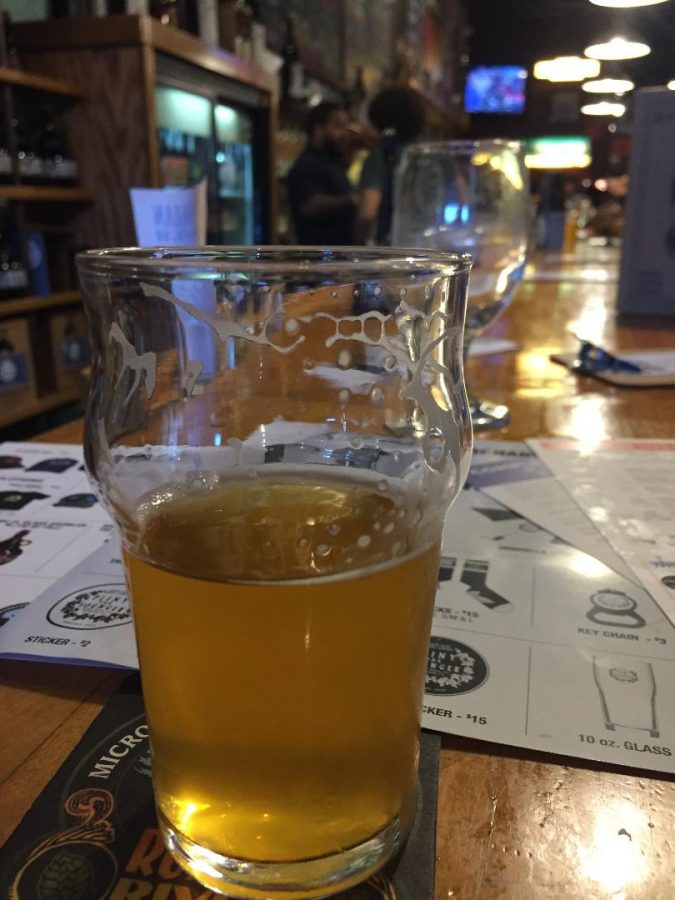 Pliny the Younger's 2020 release, in addition to being available at both the brewery's Santa Rosa and Windsor taprooms, offered something new: the coveted beer in bottles available to take home.

For two weeks every year, the Russian River Brewing Company releases one of the nation’s most sought after beers: Pliny the Younger. This Triple IPA is only available to consume at the brewery’s taprooms, that is, until this year. After 16 years of brewing Pliny the Younger, RRBC decided to make this year even more memorable and bottle its extra-special beer for fans to enjoy in the comfort of their homes, with a purchase limit of two bottles per person per day.After hearing this, I had to get my hands on a bottle of this coveted beer, so off I went to the brewery’s Santa Rosa taproom for a day filled with beer.

I was met with sunshine and a line that sprawled all the way down the block — and minimal parking. I was not surprised but more in awe of how many people wanted to try this beer. There were almost 200 people in line. Once in line, a security guard went over some ground rules. You had to first make sure your whole party was present before you’d be given a stamp to indicate you were in line. At least one stamped member had to stay in line while the rest were free to run errands or grab food at nearby restaurants. After reading us our rights, the bouncer told us to prepare for a four-and-a-half hour wait. Yes, you read that correctly, more than four hours. And no, I was not in line for a ride at Disneyland; I was in line for a beer.

After realizing that I would spend a chunk of my day standing on the sidewalk, I began to chat with people around me.

The group ahead of me included three guys in their late 30s who were all ex-military who had served in the same unit in Iraq and Afghanistan. After hearing about this holy grail of beers, they made it an annual affair to fly to California to visit each other over a pint (or a few). They thought it was pretty cool I was in line to review the experience and the beer for my college news media; they didn’t realize how much their story and personalities affected my review.

With the military guys bantering ahead of me, I turned my attention to the parties behind me, particularly a lone woman who kept screening her calls. She eventually picked up when her husband called, which wouldn’t have been noteworthy except for what she said after greeting him.

She told him she “was in a meeting” and that she had to go. Strange.

One of my new ex-military buddies went to the taco shop a few blocks away to get food for his group. I was already feeling a bit hungry and a little jealous they were about to feast in front of me.

2:20 p.m. The generosity of strangers

One of the army guys in front of me got a call from his friend at the taco shop. There was confusion on the Pliny-side end of the line, but after a bit of back and forth, he handed me the phone. The guy on the other end, the one who left the line to rustle up some grub for his fellow soldiers asked me — the random guy in line — if I wanted anything. I was stunned at the generosity, but despite my nagging hunger, I opted to not order anything.

The lady behind me dodged another call from her husband. Why would she lie? Why wouldn’t she just state she was in line for Pliny the Younger?

Clearly not my business, but definitely had me guessing.

The husband-ignorer asked me to save her spot in line while she fed her meter a couple blocks away, soI chatted with the women who were now behind me.

This was their first stop on a bar crawl; they’d planned to visit a series of bars and breweries that afternoon. I thought it was a bit odd to have a pub crawl on a Wednesday, but, like the reason my original neighbor was lying to her husband, neither were any of my business.

The husband-ignorer rejoined the line and was grateful I saved her spot. She asked why I was in line, and so I gave her my line about writing for The Oak Leaf. And although I was dying to know her reason for not only being in line but for lying about it, I didn’t have the courage to ask.

After finally making it to the front, I worked up enough courage to ask the lying woman behind me why she was crazy enough to wait in line for beer for four hours. I was both curious and nervous about her answer because I’d listened to her blatantly lie to her husband about her whereabouts for hours. What would she tell me?

Her answer: she was in line as a gift to her husband. Knowing he loves Pliny the Younger, and that the brewery was selling it bottled for the first time, my formerly shady-seeming line neighbor left work early in San Francisco, drove to Santa Rosa and waited in line all afternoon to claim her two-bottle allotment. For Valentine’s Day.

I smiled. I was relieved. Love conquers all!

The bouncer gave me a wristband that had four tabs on it: three for 10-ounce pours of Pliny the Younger, and one for my two bottles to go. As soon as I sat down I was met with a glass of the long-awaited beer.

The first sip was beautifully smooth. Then as it sat for a moment in my mouth, I could taste the very strong hoppy flavor, much stronger than its counterpart, Pliny the Elder. Surprisingly, there was no aftertaste. The flavor left almost as soon as it appeared on my pallet.

After my first glass, I struck up a conversation with the couple next to me at the bar who drove all the way from Chico. Sipping on my second pour of Younger and hearing about other people’s much longer pilgrimages for Pliny, I realized that the long wait was worth it.

I finished up my third glass, asked the bartender for my two to go bottles and left satisfied that I’d spent six and a half hours at a brewery. The beer might have not had an aftertaste, but the people I met along the way made a lasting mark.